Start a Wiki
Wolf Moon Rising is the third novel written by Lara Parker, beeing a part of Lara's own book series.

When a portrait is lost that has maintained Quentin Collins’s youthful appearance for over a century—and has also kept his werewolf curse at bay—Quentin begins to dread the full moon.

Meanwhile, David, the sixteen-year-old heir to the Collins fortune, has fallen in love with Jacqueline, a young girl living at the Old House who is the reincarnation of Angelique. David and Jacqueline are swept back in time to the prohibition era of the Twenties, where David uncovers the dark secrets of the Collins family history.

Most threatening of all, Dr. Nathanial Blair, an expert in the paranormal, has come to Collinwood because he suspects they are harboring a vampire. Fortunately, Barnabas Collins has returned to his coffin after a disastrous flirtation with life as a human. Nevertheless, what Blair discovers places the entire Collins family in jeopardy.

After the revenge of Jason Shaw Barnabas Collins became badly hurt and died almost, but Julia saved him and turned him into a vampire. His happinies was however destroyed, because he wasn't more a human and he explained Julia, that he would rather die than live as the living dead. In "The Salem Branch" Barnabas fell in love with Antoinette Harpignies, but she finally became engaged to Quentin Collins.

Full of revenge and sadness, Barnabas firstly chained Julia into a coffin and destroyed Quentins portrait, which kept his werewolf curse at bay.

The romance between David Collins and Jacqueline Harpignies continues, but they both aren't more as happy as they were in the last few months. Antoinette, Jackie's mother, has trouble with Quentin, because he blames her for the disappereance of his portrait. Antoinette has than many conflicts with her daughter and even beats her sometimes! David however promises Jacqueline to find the portrait of Quentin.

Jackie also has to fight her second ego - Angelique Collins.

In the next weeks, terror comes around whole Collinsport. More and more victims lose their blood by being attacked by the vampire and other being bursted by Quentin-Werewolf. As the wolfmoon rise Quentin is changing, during a dialogue with Antoinette, to a werewolf and almost killed her. Barnabas wanted to use his chance "to get in Antoinettes heart" and attacked Quentin, planing to protect Antoinette. After the fight he's badly hurt, but Antoinette saved him somehow and took care of him.

Most threatening of all, Dr. Nathanial Blair, an expert in the paranormal, has come to Collinwood because he suspects they are harboring a vampire. He explains, that he does want to write a book about vampires and held a seance to get in the year 1929. Quentin promised him to say, who the vampire is, if Blair takes him to 1929.

David and Jacqueline find together an Düsenberg (old car type). As they watch in, they are transported into 1929 - a Collinwood, where are partys, mafia and Ku Klux Clan usually. Jackie became  a friend of Liz - the young Elizabeth Collins Stoddard -.

Jackie is also trying to help Liz to escape with Quentin Collins. (in this story were Quentin and Liz once lovers). While David get from Charles Delaware Tate an unsigned copy of the portrait, and tries to find Jacqueline.

As they two find there each other (Liz couldn't escape with Quentin), they are witnesses of an execution, they shouldn't see. The executers wanted to catch and kill them off. As Jackie and David reach Widow's Hill, all hope seems to be lost, but Jackie brought them two to fly away from Widow's Hill and end back in 1971.

In 1971 Antoinette became an victim of Barnabas and losed every night so much blood, that she became very ill. Julia is being saved by Jackies classmate Ernie Slavic, as he opens the coffin losing his own life. Julia later found Antoinette and wanted to help her, but the woman however died already in Julias car of blood loss. Julia came later to Barnabas and said him, that he maked the biggest mistake - she could heel him again, but he chained her in a coffin. She disappeared and didn't appear more.

The fight between Jackie and her second ego continued. However Barnabas support Jackie in her fight against Angelique, while a heartbroken David is being captured by Nathanial Blair. Blair suspects, that David is a vampire and was planning to do deathly experiments with the boy! Barnabas killed Nathanial Blair, by saying that he was the vampire, not David. The boy is saved.

At the end a werwolf-Quentin attacked Jacqueline, David and Carolyn, but then Jackie singed the copy of Quentins portrait and Quentin became normal.

The tour kicked off in Los Angeles, U.S.A and has visited many states of the countries in the summer of 2013. The Tour ended on September, 14 in Burbank.

On the official Dark Shadows SHADOWGRAM it was confirmed on May 7, 2013 that a 4th book of the series will  appear.

Lara Parker confirmed this also on her blogspot. She said, that the 4th book will include Victoria Winters' story. The title and release dates are currently unknown. 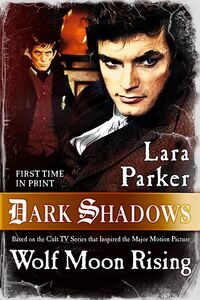 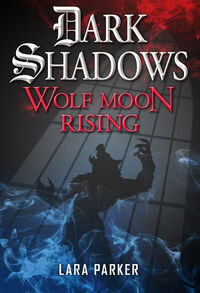 Kindle Cover
Add a photo to this gallery
Retrieved from "https://darkshadows.fandom.com/wiki/Wolf_Moon_Rising?oldid=134978"
Community content is available under CC-BY-SA unless otherwise noted.