Portrait of the phoenix

The portrait of the phoenix was begun by Sam Evans upon the return of Laura Collins to Collinsport. It began as a portrait of a woman surrounded in flames. Eventually, the shape of a young boy joined her in the painting. It was brought to Collinwood incomplete, but mysteriously, David's image was filled in while the picture hung on a wall. After seeing the complete painting, Roger Collins threw the portrait into the drawing room's fireplace. Along with himself, Sam Evans, Victoria Winters, and Carolyn Stoddard heard a terrible scream as it burned.

An earlier version was started by Sam Evans before it caught fire, mysteriously leaving the cover completely undamaged (146). 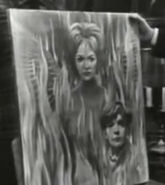 Finished portrait of the Phoenix 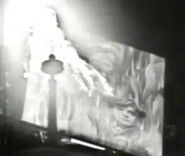