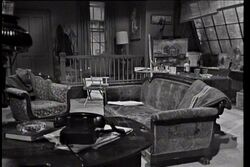 The Evans cottage in Collinsport was a one-story home where Sam Evans and his daughter Maggie lived in 1967 (2, 3, 7).

The same set is used for the painting studio for Charles Delaware Tate in 1897. It is here where he paints the portrait of Quentin Collins (818).

Retrieved from "https://darkshadows.fandom.com/wiki/Evans_cottage?oldid=121795"
Community content is available under CC-BY-SA unless otherwise noted.