Start a Wiki
Dark Shadows: The Vampire Curse is a DVD compilation of episodes 370 to 460 & 210 - 212, key scenes from which have been edited together to form a three hour feature. It focuses on the love triangle between Barnabas Collins, Josette DuPres & Angelique Bouchard.

Cursed by the scorned witch Angelique, Barnabas Collins returns to Collinwood as a creature of the night

The Gothic television classic DARK SHADOWS attracted a fiercely devoted following during its airing on ABC-TV from 1966-71. The character of Barnabas Collins became a cultural icon and turned the series into a must-see event for over 20 million viewers.

Cursed by the scorned witch Angelique, Barnabas Collins returns to Collinwood as a creature of the night.

In this special release, the story behind Barnabas' transformation from mere mortal to living dead is was cursed as one of the living dead is detailed in a selection of storylines from the supernatural series. 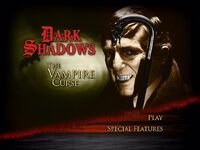 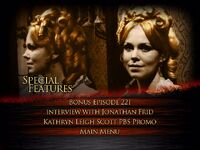 Add a photo to this gallery
Retrieved from "https://darkshadows.fandom.com/wiki/Dark_Shadows:_The_Vampire_Curse?oldid=137332"
Community content is available under CC-BY-SA unless otherwise noted.