Start a Wiki
Dark Shadows: The Haunting of Collinwood is a DVD compilation of episodes 639 to 694, key scenes from which have been edited together to form a three hour feature. It focuses on Quentin Collins' possession of David Collins & Amy Jennings.

The Gothic television classic DARK SHADOWS attracted a fiercely devoted following during its airing on ABC-TV from 1966-71. The character of Barnabas Collins became a cultural icon and turned the series into a must-see event for over 20 million viewers.

High atop Widows' Hill off the stormy Maine coast sits the foreboding Collinwood estate, home for centuries of the wealthy and mysterious Collins family. This special release reveals how the children of Collinwood become possessed by the ghost of Quentin Collins. 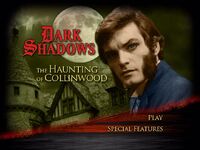 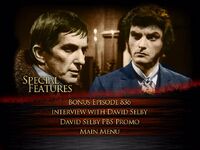 Add a photo to this gallery
Retrieved from "https://darkshadows.fandom.com/wiki/Dark_Shadows:_The_Haunting_of_Collinwood?oldid=119978"
Community content is available under CC-BY-SA unless otherwise noted.