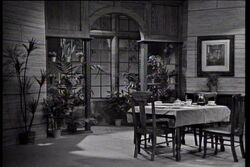 The Breakfast nook at Collinwood was where the family had breakfast.

It is seen for the first time in episode 5 when Victoria Winters agreed to have coffee with Carolyn Stoddard before leaving. Roger Collins met them there and Roger gave Victoria a letter sent from the Hammond Foundling Home. Later Carolyn was seen ironing there. It was again seen in episode 15 when Liz calls Matthew Morgan and tells him she will be in the Kitchen, which is barely seen next to the Breakfast nook.

Retrieved from "https://darkshadows.fandom.com/wiki/Breakfast_nook?oldid=96549"
Community content is available under CC-BY-SA unless otherwise noted.