The great estate of Collinwood, but different now, because the people there live in another band of time. A time which Barnabas Collins hoped would release him from his terrible curse. But once in this parallel time, Barnabas discovered his hope was in vain. Now he lies trapped in this coffin, unable to witness the events which swirl around him. For this night, one man questions whether this woman is truly dead, or whether she walks disguised as another. And he intends to find out.

Bruno sneaks into Collinwood and goes up to the East Wing. He enters Angelique's room and again accuses Alexis of being Angelique, and claims that she brought Dameon back from the grave to torment him. Alexis is confused and as no idea who Dameon is, but Bruno doesn't believe her and starts to strangle her.

Quentin stops Bruno just before he can kill Alexis and kicks him out. After calming Alexis down, Quentin vows to have him thrown off the estate forever. Quentin returns to the drawing room, and finds that Bruno still hasn't left the house. Bruno brings up Dameon and manages to get Quentin to wonder if Alexis is actually Angelique. Quentin gets frustrated and finally kicks Bruno out.

At the lab, Sabrina is growing increasingly frustrated with Cyrus' devotion to his experiment, and the fact he has been paying very little attention to her. Sabrina tells him she is worried about him.

Back at Collinwood, Quentin goes to search for Alexis, but only finds a note that says "Hannah, please meet me at the gazebo at ten o'clock. -A". Quentin compares the handwriting to a note Angelique has written long ago, and notices that the handwriting is identical.

Alexis catches Quentin, but quickly leaves after she collects her note. Quentin speaks to the portrait of Angelique and vows to find out the truth.

Meanwhile, Buffie arrives at the lab to speak with Cyrus. She is still very distraught about the recent altercations with Yaeger, but she confronts him about the check that Yaeger gave her with Cyrus' handwriting. Cyrus confirms that he signed the check and Buffie seems relieved. Buffie asks Cyrus many questions about Yaeger, but Cyrus says he has sent Yaeger away and he gives Buffie some money to cover Steve's hospital expenses. Before Buffie leaves, she admits she likes Yaeger "sometimes." Sabrina returns and wonders who the girl was and asks more questions about Yaeger. Before Cyrus can answer, the phone rings. It's Quentin, and he asks for Cyrus' help to open a tomb.

Cyrus goes to Collinwood and Quentin tells him he wants to open Angelique's tomb. As the two talk in the drawing room, Alexis enters the foyer and overhears the conversation. Cyrus agrees to help him.

Later that night, Quentin and Cyrus prepare to open Angelique's coffin. Just before they can open it, Alexis shows up and offers to leave Collinwood forever if he doesn't open it. Quentin rejects her offer, and says he needs to end the madness that is going on at Collinwood. Quentin opens the coffin and is shocked at what he sees.

Cyrus: Miss Harrington? Despite what you said...you like John Yaeger...don't you?
Buffie: Hm...sometimes.

Dark Shadows - Episode 999 on the IMDb 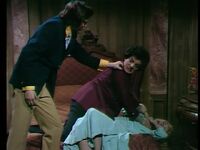 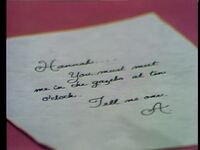 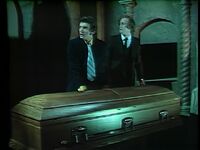 Exhuming Angelique
Add a photo to this gallery
Retrieved from "https://darkshadows.fandom.com/wiki/999?oldid=143501"
Community content is available under CC-BY-SA unless otherwise noted.