This is Collinwood as it exists in the strange and disturbing world of Parallel Time. A world in which Barnabas Collins lies trapped in a chained coffin. The prisoner of a man named Will Loomis, unable to witness or deal with the terrifying events going on around him. Once such event is the effort of a young chemist in Collinsport, to alter the human personality. Separating the good from evil. And he has suceeded, for he has discovered another side to his own personality. One that may permanently change his life.

Yaeger returns to the lab and searches for the antidote to turn back into Cyrus. Before he can drink the antidote, Quentin walks in and demands to know where Cyrus is. Yaeger makes up a story as to Cyrus' whereabouts, but Quentin doesn't believe him and vows to wait in the lab until he returns.

Quentin confronts Yaeger about the check he used at the Eagle, but Yaeger says he is innocent and dares Quentin to call the police. When Quentin goes to use the phone, Yaeger runs off with the antidote and locks Quentin in the lab. Sabrina rushes down the stairs to help him, but Yaeger is gone by the time they get the door open. Soon they hear somone coming down the stairs, and they are shocked to see that Cyrus has returned. Cyrus explains that he never went to New York and actually was in Portland. Quentin asks Cyrus how much he knows about John Yaeger. Cyrus gets nervous with Quentin's questions, but he says Yaeger is helping him with his experiments. After Quentin leaves, Sabrina makes it clear to Cyrus that she doesn't believe a word he has just said.

After dealing with more of Sabrina's questions, Cyrus tells her that he will "deal" with Yaeger himself. Bruno comes downstairs and asks to speak to Cyrus alone. After Sabrina leaves, Bruno tells Cyrus that Dameon's ghost is tormenting him. Cyrus agrees to help him, but he wants more time to think about the situation.

Quentin returns to Collinwood and Alexis runs to him. She says she has been alone in the house for hours, which makes Quentin wonder where Trask has been. Alexis tells Quentin she has a feeling that something bad is about to happen at Collinwood.

Bruno is alone in his room, very nervous. Dameon appears to him in the mirror and starts laughing at him. He disappears and the room catches on fire.

Bruno screams for Cyrus as the room continues to burn. Cyrus shows up and grabs a curtain and uses it to put the fire out.

At Collinwood, Quentin suggests to Alexis that she should leave town for a few days, but she decides to stay. Alexis tells him she feels much better knowing that Quentin is back in the house, and gazes at him as she leaves the room.

At Cyrus' lab, Bruno feels there is no help for him, but he devises a new theory that Angelique brought Dameon back from the grave to avenge her murder. Cyrus tells him he needs to stop accusing Alexis of being Angelique, but Bruno is already convinced and tells Cyrus he must defeat Angelique, or else Dameon will kill him.

Meanwhile, Quentin is trying to reach Maggie via telephone, but he is unsuccessful.

Bruno sneaks into Collinwood and rushes into Angelique's room. He claims she brought Dameon back from the grave, but Alexis says she has never even heard of Dameon. Bruno grabs Alexis and starts to strangle her.

Alexis: This house...so quiet....It's like the calm before the storm. I don't know what it means, Quentin. But somehow I feel that all of us...are doomed.

Dark Shadows - Episode 998 on the IMDb 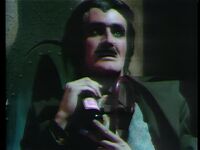 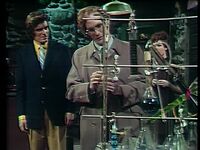 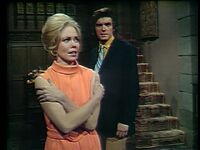