Yaeger moves into the same building as Buffie; Quentin suspects that Yaeger has kidnapped Cyrus.

The great estate of Collinwood in Parallel Time, where each person follows a new destiny. But Barnabas has not found the peace he wanted so desperately. Instead, he is trapped in a coffin, the prisoner of a half-mad author. He does not know that on this night, a young scientist has taken a potion he believes will eliminate evil from his mind. But instead, has changed him into a strange, violent creature who causes havoc wherever he goes.

Buffie explains to Quentin that Yaeger gave her a check that was signed by Cyrus. After Quentin leaves, Yaeger appears and starts to strangle her.

Yaeger decides to let Buffie go and even tries to romance her. Buffie orders him to get out, but he warns her that he will return very soon.

The next morning, Quentin is talking to Sabrina about Cyrus' whereabouts. He tells her about the check that was paid for the damages at the Eagle. Sabrina examines Cyrus' ledger and discovers that a check has been ripped out. She then recalls an I.O.U. that Cyrus had sitting on his desk earlier from someone named John Yaeger. Sabrina starts to panic and wonders if something happened to Cyrus.

Meanwhile, Buffie is at her apartment when she notices someone is trying to break in. It is only Minnie, the landlady, who has come to collect rent. Minnie also thanks her for recommending someone to rent a room in her building. When Buffie asks who it is, Yaeger walks in and announces it is him.

Buffie is very upset to learn that Yaeger has rented a room in her apartment building, but Minnie is very enthusiastic about the money it will bring in. After she leaves, Yaeger again tries to make advances on her, but the phone rings. It's Quentin, who is wondering if she has seen the man causing trouble at the Eagle from the night before, or if she has seen Cyrus. Buffie quickly tells him she hasn't seen anyone and hastly hangs up the phone at Yaeger's request. Buffie is upset that had to lie to Quentin and tells Yaeger she hates him.

Back at the lab, Sabrina tells Quentin she called the hotel where Cyrus usually stays in New York, and Sabrina learns that Cyrus hasn't made any reservations. Quentin says he knows two people who might know where Cyrus is, and he sets out to learn the truth.

Buffie is still at her apartment, packing up her things. Steve asks what's wrong, but Buffie only says she is going away for a short while. Steve realizes she is lying and is troubled by Yaeger. Buffie requests he stops trying to help her and leave her alone. Steve finally gives up and leaves. As he walks about of the apartment building, Yaeger emerges from an alley and begins to follow him.

Yaeger catches up with Steve and pulls a knife on him. Steve manages to knock away the knife, but Yaeger gets the upper-hand and starts to strangle him. Steve calls for help and soon a police whistle is heard in the distance.

Meanwhile, Quentin is at Buffie's apartment, asking her questions about Yaeger. Buffie tries to dodge the subject at first, but she finally confesses that he has been stalking her and she is very distraught. Quentin thinks that Yaeger kidnapped Cyrus, but Buffie isn't quite sure.

At night, Sabrina locks up the laboratory for the night. Soon the police whistles are heard, and Yaeger rushes in. As he is looking for the antidote to change back into Cyrus, Quentin walks in and demands to know where Cyrus might be. Yaeger makes up a story about his whereabouts, but Quentin doesn't believe a word he is saying and vows to wait until Cyrus returns.

Dark Shadows - Episode 997 on the IMDb 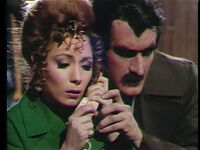 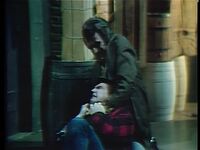 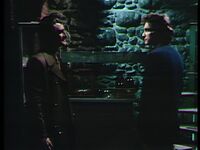 Face Off
Community content is available under CC-BY-SA unless otherwise noted.
Advertisement