Yaeger has a fight at the Eagle and physically abuses barmaid Buffie Harrington.

Night at Collinwood, in a time parallel to our own. Barnabas Collins is still the captive of the avaricious author William Loomis, and does not see the mysteries and terrors growing in the countryside around. But could he see, he would witness this night an act that tips the delicate balance of good and evil, with evil the undisputed victor.

Cyrus returns to his lab and drinks a potion he had prepared earlier. He collapses in pain and turns into John Yaeger.

Cyrus, now as his evil alter-ego John Yaeger, wakes up and destroys part of his lab. He admires himself in a mirror and stumbles upon a closet full of fancy clothes that were stolen the last time he turned into Yaeger, and he prepares for a night on the town.

Trask returns to Collinwood and Alexis sees him from the top of the stairs. Alexis asks him where Quentin is and Trask tells her he took Amy to the Loomis House. She notices that Trask has bolted the front door shut, even though Quentin is not in the house. Trask finally admits that he thinks there is great danger at Collinwood, and everyone should abandon the house. Soon there is a knock on the door. Trask opens it and Quentin storms in. Trask again suggests that they close up the house and leave, but Quentin thinks it's a stupid idea, and decides to call Cyrus for help.

At the lab, Yaeger refuses to answer the phone and instead goes to his safe. He pulls out a bottle of potion that says "Do Not Touch!" on it. He then returns to his closet and grabs a cane, which has a retracting knife on the bottom of it, and leaves.

At the Eagle Tavern, the barmaid, Buffie Harrington, and a man, Steve, are flirting with each other when Yaeger walks in. Buffie recognizes him, and Steve refuses to leave. The two get into a fight and Yaeger kicks him out. Yaeger tells her that he will pay for the damages, and leaves to go get money.

Quentin and Trask are discussing the recent strange happenings at Collinwood. Quentin demands to know what Bruno knows about Dameon, and also wonders why Trask disappeared the day he was murdered. Trask apparently did not know that he was murdered, and wonders if Bruno was the murderer. Quentin tells him he knows he told Bruno about Dameon's appearances. Trask contemplates leaving Collinwood forever, but Quentin stops him and goes to Cyrus' lab for help.

Later that night, Yaeger returns to the Eagle Tavern with a check to pay for the damages caused in the fight. Buffie wonders if the check is a joke, because the name on the check is "Cyrus Longworth." She admits she used to work for the Collins family and knows who Cyrus is. Yaeger tells her to take the check and not ask any more questions, or else she will end up like other people who tried to get in Yaeger's way.

Yaeger leaves the Eagle and is walking through a dark alley when he sees the man he got into a fight with earlier. The two briefly exchange verbal insults and Yaeger ends up beating him with his cane. Before Yaeger can kill him, Quentin shows up and Yaeger runs off. Quentin helps the man up and takes him back to the Eagle.

Quentin and Steve arrive at the Eagle, but he ends up leaving to go find Yaeger. Buffie tells Quentin about the check she received from Yaeger and how it was signed by Cyrus Longworth. Quentin is confused, but returns the check to her and leaves. Yaeger shows up moments later. He confronts Buffie about telling Quentin who signed the check and starts to strangle her.

Dark Shadows - Episode 996 on the IMDb 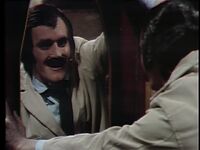 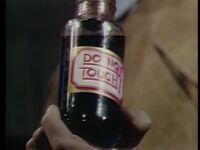 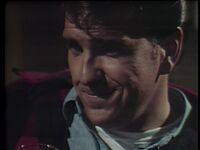 Steve
Add a photo to this gallery
Retrieved from "https://darkshadows.fandom.com/wiki/996?oldid=143567"
Community content is available under CC-BY-SA unless otherwise noted.