Cyrus drinks the new potion he has created and transforms into John Yaeger.

High above the crashing waves, Collinwood seems to stand serene in the clear night air. But within its walls, there is only mystery and fear. And in the cellar of the Old House, Barnabas Collins lies chained in a coffin, unable to witness the frightening events that take place in the mysterious world of Parallel Time.

While by herself, Dameon appears to Amy and beckons her to follow him. The two enter the basement and Amy witnesses Dameon disappearing through a wall.

Amy reappears in the foyer, much to the surprise of Quentin and Trask. She is frightened and in a state of shock. Quentin manages to calm her down and Amy tells him how she saw Dameon vanish through a wall. Amy agrees to take Quentin back to the basement to show him where everything happened. Once they are gone, Trask grabs his coat and quickly leaves the house.

In the basement, Quentin inspects the wall where Amy said Dameon disappeared. The wall is rock solid and Amy asks to go upstairs, and the two exit the basement.

Trask shows up at Bruno's cottage and informs Bruno that Dameon's ghost is at Collinwood, and he should leave town immediately. Bruno doesn't buy Trask's story and even asks him how much money Quentin offered him to try to get him to leave town, but Trask insists he is only trying to help him. The phone rings and Bruno refuses to answer it, but Trask does. It's apparently Dameon on the other end, who says, "It's only a matter of time."

Bruno takes the phone from Trask and demands to know who is on the other end, but no one is there. He hangs up the phone and kicks Trask out. Once Trask is gone, the phone rings again. It's Dameon, who repeats the same message as he did to Trask.

At the labratory, Cyrus explains to Sabrina that he will be going out of town for a few days. Sabrina then finds a note on his desk from someone named "John Yaeger." She asks who he is, and why he owes Cyrus money according to the note, but Cyrus dodges her questions.

At Bruno's cottage, the phone continues to ring and Bruno disconnects the phone. His piano then starts playing by itself, much to his horror.

Bruno pleads with Dameon to go back to his grave, and he slams the piano shut. He turns around and sees Dameon. Dameon begins to approach him, but Bruno runs out of the cottage.

Cyrus and Sabrina are working in the lab when there is a knock on the door. Bruno rushes in and requests to speak to Cyrus alone. Sabrina reluctantly leaves. Bruno begs Cyrus for a place to stay and promises he won't cause any trouble. Cyrus says as long as he is working on his experiment, no guests are allowed. Bruno continues to beg until Cyrus finally gives in, and lets him stay in a room upstairs for the night.

Later that night, Cyrus returns to the lab and drinks a potion that he had prepared earlier. He screams in pain and collapses to the floor, begging for help. A transformation begins to take place, and when he regains consciousness, he has turned into John Yaeger.

Cyrus: To bring forward all that is good in man, to rid him of the impediments of evil, to fulfill all that is best in his divided nature.

Dark Shadows - Episode 995 on the IMDb 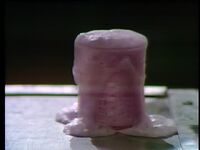 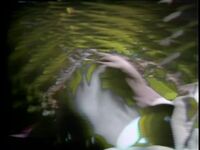 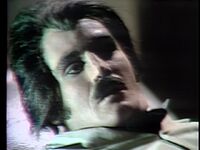