Bruno panics when Quentin reports he saw the ghost of Dameon Edwards.

The slow, descending night shrouds the towers of Collinwood in an ever-deepening dark. But a darkness beyond the dark of night keeps from the eyes of Barnabas Collins the ever-growing mysteries that haunt the halls of the ancient house. For he has found himself not only captive in Parallel Time, but imprisoned in a chained coffin, ignorant of a new terror that stalks the great estate.

Quentin is tormented by unseen forces at Collinwood and hears "Ode To Angelique" playing throughout the house. He runs into the drawing room and sees something that frightens him.

Quentin finds a man named Dameon Edwards sitting in a chair, apparently dead. He turns his back momentarily and notices his body is gone. He frantically searches the house, but finds no sign of him. He returns to the drawing room and finds Mr. Trask, the butler, cleaning the room. Quentin asks Trask if he has noticed anything different about the house, or the whereabouts of Dameon. Trask only knows that Dameon disappeared mysteriously a few months ago and hasn't been seen since.

Dameon appears to Amy upstairs. Amy is happy to see him, but he disappears again when she isn't looking.

Amy goes to the drawing room and tells Quentin that she just saw Dameon upstairs. The news makes Trask nervous and he breaks a glass.

Amy tells Quentin she saw Dameon in the East Wing, near Angelique's room. Trask is visibly upset and worried as the two discuss what just happened. Quentin leaves Amy with Trask while he goes to search the East Wing.

Quentin enters the East Wing and goes into Angelique's room. He sees Dameon, but he quickly disappears. Upon further inspection, Quentin finds blood on the floor where Dameon was standing.

Quentin returns to the drawing room and informs Amy he is going to move her to the Loomis House for a while, thinking that a change of scenery might do her good. After Amy leaves, Quentin tells Trask he saw Dameon once again.

Quentin barges into Bruno's cottage and tells him he saw Dameon at Collinwood, which shocks Bruno.

Bruno appears nervous as Quentin talks about Dameon. Quentin tells him he is dead and Bruno tries to deny he knew this, but Quentin doesn't believe him.

Amy is by herself in the drawing room at Collinwood and Dameon appears to her. She tries to talk to him, not knowing he is dead. Dameon beckons her to follow him and they enter the servant's quarters. Quentin returns to the house and notices Amy is missing. Trask returns and finds that she is gone as well. The two split up to search for her.

Dameon and Amy enter the basement and Dameon disappears through a wall.

Bruno (to Quentin): Now, if you'll pardon me, I was entertaining someone very important...namely, myself.

Dark Shadows - Episode 994 on the IMDb 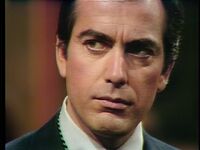 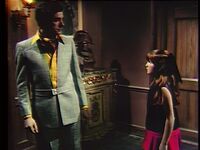 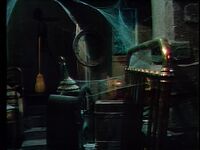 Basement
Add a photo to this gallery
Retrieved from "https://darkshadows.fandom.com/wiki/994?oldid=143545"
Community content is available under CC-BY-SA unless otherwise noted.