Cyrus refuses to tell Horace the purpose of his experiment.

Night has returned to Collinwood. But this is the Collinwood that exists in another parallel time, where people have made other choices. Here, Barnabas Collins lies chained in his own coffin, unaware that a drama is unfolding, where all distinctions are lost between the living and the dead.

Quentin enters the East Wing and hears Alexis screaming. The two notice that the piano is playing "Ode To Angelique" by itself, and Alexis is convinced that Angelique has returned.

Quentin refuses to believe that Angelique is back at Collinwood, but Alexis is convinced otherwise. She also informs Quentin that earlier her room smelled like Angelique's favorite perfume. The two also discover a bracelet on top of the piano that wasn't there before. Quentin suggests he call the authorities and have Angelique's body exhumed, but Alexis thinks it is a bad idea because the police will think they are all crazy. The two ponder what to do next.

Sabrina is working in Cyrus' lab and there is a knock at the back door. It's Horace, who has another package for Cyrus. Horace notices that Sabrina's engagement ring is missing, which makes Sabrina upset. Sabrina tries to get rid of him, but Horace says he will wait until Cyrus returns so he can give him the package himself.

Alexis decides to move to another room in the house. As they walk through the house, Alexis feels cold and feels that someone is following them, but there is no one else in the hallway.

Cyrus returns to his lab and signs for the package that Horace has brought him. After Sabrina leaves, Horace says the new chemical has been altered and it will hopefully eliminate the amnesia side-effect. Horace pleads with Cyrus to tell him more about the experiment Cyrus is performing, but Cyrus refuses to tell him anything and kicks him out. Sabrina returns and tells Cyrus she thinks he has been working too hard, and she forces him to go upstairs and take a break. After Cyrus leaves, there is another knock at the back door. This time it's Alexis, who wants to talk about the first seance where Angelique died. Sabrina tells her she believes she was murdered, but she can't remember who it was. Alexis apologizes for bringing the matter up.

Hannah returns to Collinwood at Quentin's request and asks her to help him find out if there is a spirit haunting the mansion. Soon the lights go out and Hannah starts to choke.

After a few moments, the lights turn back on and Hannah recovers. As Quentin asks what can be done to get rid of the spirit, the desk drawer opens by itself. Inside there is a copy of Bruno's "Ode To Angelique" music sheet that has dried blood on the cover. There is also a note that says, "It must be tonight!" Hannah wants to leave because she is frightened, but Quentin forces her not to say anything to Bruno about what has happened.

Later that night, Quentin and Alexis are talking in the drawing room when the phone rings. It's Hannah, saying she has read her tarot cards and says there is great danger coming to Collinwood. Quentin contemplates abandoning Collinwood, but Alexis vows to remain in the house. After Alexis leaves, Quentin is tormented by unseen forces and hears "Ode To Angelique" playing throughout the house. He runs back into the drawing room and sees something that frightens him.

Alexis: How can a murdered spirit be at rest until the murderer’s been found?

Quentin: The music, the picture of Bruno, the blood... What does it all mean?

Dark Shadows - Episode 993 on the IMDb

Dark Shadows Everyday - Episode 993 - All I Know Is Danger 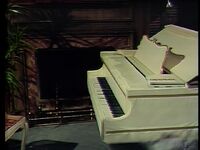 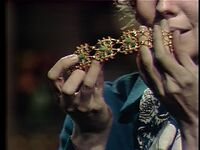 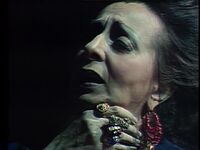 Phantom Strangler
Add a photo to this gallery
Retrieved from "https://darkshadows.fandom.com/wiki/993?oldid=142537"
Community content is available under CC-BY-SA unless otherwise noted.