The massive towers of Collinwood climb into the night, a sight at once familiar and yet strange, for this is Collinwood in another band of time where all its inhabitants lead other lives, lives both familiar and strange, like the house itself. But the one man aware of this awesome phenomenon lies trapped in the unremitting darkness of a chained coffin, while around him swirl events that hold a hint of terror yet to come.

Daniel awakens from a bad dream to find Alexis trying to console him. He asks her who she really is, and as she is about to tell him, Quentin appears in the doorway.

Alexis again tells Daniel that she is his aunt and not his mother. Daniel gets out of bed and Alexis fixes his pillow and and blankets. He notices how she prepares the bed just as Angelique would, all while humming "Ode To Angelique," which makes Quentin think that perhaps Alexis might in fact be Angelique.

Bruno is speaking to Hannah Stokes, the aunt of Alexis and Angelique, and demands proof that it really is Angelique at Collinwood. She agrees to help him and requests 24 hours to find out the proof.

Later that night, Quentin returns to Daniel's room, and finds that Daniel is still awake. Daniel again tells him that he is certain Alexis is Angelique, and Quentin appears to start believing him.

The next morning, Hannah is at Collinwood and speaking to Daniel. Daniel notices Hannah has brought her tarot cards. Alexis comes down the stairs and she and Hannah go into the drawing room. While Daniel hangs up Hannah's coat, he steals the tarot cards.

In the drawing room, Hannah asks Alexis about the seance that took place a couple of nights ago. Alexis begins to panic and tells Hannah she doesn't want to discuss it. While Alexis isn't looking, Hannah steals her handkerchief and hides it. Alexis decides she doesn't want to see Hannah, knowing she never cared for her as much as she did for Angelique, and excuses herself. Hannah takes the initiative and leaves as Quentin walks in. Quentin learns that Bruno sent Hannah to Collinwood.

Upstairs, Daniel and Amy are playing with Hannah's tarot cards. Daniel lays them out on his desk and Hannah walks in, knowing that Daniel had taken them. She looks at the layout of the cards and immediately becomes concerned. Daniel asks her what is wrong, but Hannah dodges his question, takes the cards, and quickly leaves the room.

That night, Hannah goes to Bruno's cottage and performs a ceremony over the handkerchief she stole from Alexis. During the ceremony, the handkerchief bursts into flames, much to the horror of Bruno and Hannah.

Bruno asks Hannah what has happened and what it could mean, but Hannah isn't quite sure. She decides to lay out her tarot cards. As she does, Quentin shows up at the front door and stands in the entryway, unbeknownst to Bruno and Hannah. After looking at the cards, Hannah says that Angelique is at Collinwood, which prompts Quentin to leave. Hannah tells Bruno she just isn't sure what form Angelique has returned from the dead in.

Quentin returns to Collinwood and wonders about what he has just seen. As he walks in, he sees Amy talking on the phone to Chris and says she doesn't want to stay at Collinwood anymore. Amy tells Quentin that she is frightened by Alexis' presence in the house. Quentin requests some time to straighten things out at Collinwood, to which Amy agrees.

Quentin goes upstairs and into the East Wing. He hears the piano playing "Ode To Angelique" and opens the doors. Alexis screams, and Quentin sees that the piano is playing by itself.

Alexis: Well, I'm afraid that the way to straighten and plump a pillow is fairly universal knowledge.

Dark Shadows - Episode 992 on the IMDb 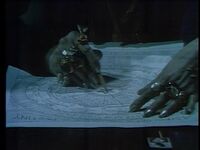 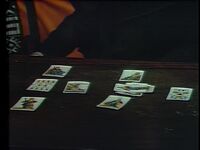 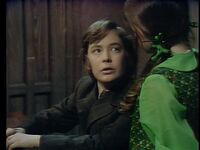 Daniel & Amy
Add a photo to this gallery
Retrieved from "https://darkshadows.fandom.com/wiki/992?oldid=142524"
Community content is available under CC-BY-SA unless otherwise noted.