The great estate of Collinwood, looking the same, but existing in another band of time. A time similar to ours, but very different. A time with Barnabas Collins captured, chained in his coffin, unable to change the strange events which whirl around him. This night, there has been an attempt to re-create a seance, a seance in which Angelique died. And to everyone's horror, a voice from beyond the grave tells them all that Angelique was murdered.

Cyrus walks Sabrina back to her room upstairs at Collinwood. Sabrina is very shaken and asks Cyrus what she said during the seance. Quentin bursts into the room and says Angelique was not murdered, but died of a stroke. Sabrina says Quentin is wrong, and she was in fact murdered.

Quentin refuses to believe Angelique was murdered just because of what a spirit said through her, and angrily leaves the room. Sabrina tells Cyrus she knew that he was attracted to Angelique but knew she was evil, and asks if he killed her. Cyrus is appalled at the question and tells her he is not the murderer. Sabrina is convinced that someone at the seance is the culprit.

Alexis is in the drawing room and Quentin is trying to calm her down, but to no avail. She asks Quentin if there was an autopsy performed on Angelique, and Quentin tells her she died of a ruptured brain vessel which triggered a stroke. Alexis ponders who could have killed her, and she announces she won't leave Collinwood until she finds out who did it.

Quentin leaves the drawing room and sees Daniel at the top of the stairs. He asks Quentin why Elizabeth is crying and where Maggie is. Daniel gets excited when he learns that Maggie is gone, but upset again when Quentin says she will return some day. Alexis opens the drawing room doors and Daniel sees her. Daniel runs into her arms, exclaiming, "Mother! You've come back!"

Quentin and Alexis try to tell Daniel that she is only Angelique's twin, but Daniel doesn't believe either of them and runs to his room, with Alexis chasing after him.

Sabrina has finally calmed down somewhat as she talks with Cyrus. She starts to talk about how she was attacked the previous night and remembers nothing after that. She asks Cyrus if she knew why she came to Collinwood in the first place, but Cyrus knows nothing. Cyrus assures her they will never see or hear from the attacker again.

Daniel is looking out his bedroom window and Alexis walks in. Alexis offers him her friendship, but Daniel wants to be alone.

Cyrus and Sabrina are in the foyer, preparing to leave. Sabrina is still thinking about the seance that just occurred. She tells Cyrus she wants to get out of the house as quickly as possible, as there is an evil force on the estate. Together they leave as Alexis watches from the balcony.

Cyrus is in his lab and speaking to someone on the phone. He asks whoever he is talking to if he can re-work the chemical so it won't have amnesia as a side effect. The other person agrees, and Cyrus hangs up the phone as he looks at his book of matches he got from The Eagle.

At Collinwood, Quentin goes to see Daniel, but he is still upset and wonders why Quentin just won't admit that Alexis is Angelique. Quentin tells her the sooner he accepts the fact that his mother is dead, the better off he will be.

Cyrus goes to The Eagle and orders a sherry. He speaks to the bartender about any events that happened the previous night. The bartender describes a "big guy with pockets full of money" came in and caused a lot of trouble. The man attacked another patron and broke his arm, and then he was attacked for trying to break up the fight. Cyrus becomes very nervous as the bartender continues to tell him what happened. He thanks the bartender and quickly leaves without drinking any of his sherry.

Later that night, Daniel has a dream where Angelique calls out to him and she then starts laughing at him. Angelique appears to him by the window, but Daniel can't move towards her and she disappears. The dream ends and Alexis enters his room to calm him down. Daniel again asks her about her real identity. Alexis is about to answer his question when she notices Quentin is watching over them.

Cyrus (to Sabrina): Your mind went from evil to evil.

Alexis: You loved your mother very much, didn't you, Daniel?
Daniel: Yes. And we fought too. It wasn't all mushy.

Dark Shadows - Episode 991 on the IMDb 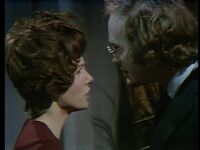 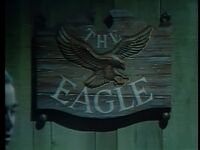 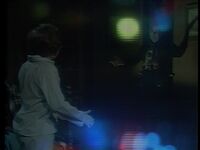