Cyrus is unable to remember what happened to him the previous night, he finds out from the police that a strange man was terrorizing the neighborhood and entered his house.

This is the great house at Collinwood as it looks in a strangely different time. A time existing parallel with our own. But in which people who look familiar to us are actually strangers, leading completely different lives. It was Barnabas Collins who first discovered the existence of this other band of time, and then found his way into it. Soon afterward, a man named William Loomis learned Barnabas' darkest secret. Now Barnabas is chained in a coffin, unable to observe the strange and frightening events occurring in this world of Parallel Time.

Cyrus wanders into his laboratory in his pajamas and notices the door is still open. He hears the phone ringing and goes to answer it. While on the phone, he notices his entire desk is in shambles. Upon further investigation, he finds his broken glasses and an empty bottle of alcohol. On the desk, he finds a note that says "I.O.U. One hundred dollars. John Yaeger." He also finds a book of matches from The Eagle Tavern, and soon realizes he has no idea what happened to him the previous night. Soon there is a knock at the door and a police officer arrives, and wants to question Cyrus about what happened last night.

The officer, Frank Paxton, informs him that Sabrina was attacked near Collinwood, but she didn't suffer any injuries. There were various assaults reported around town throughout the night, and the man apparently entered Cyrus' house with a key. The man was described as a big, broad man with a mustache, and was dressed very well. Cyrus assures Frank he will be on the lookout for the unknown culprit.

Meanwhile, Sabrina is still in a mild state of shock following her attack. Carolyn is trying to console her, but no avail, saying she only wants to see Cyrus. Soon after, Cyrus enters the room, but Sabrina is still upset and tells Cyrus her engagement ring is missing. Carolyn suggests calling a doctor for Sabrina. As Cyrus goes to the phone, he reaches into his pocket and finds Sabrina's ring.

Later that night, Sabrina finally manages to fall asleep and Carolyn leaves. Cyrus realizes the man who attacked Sabrina, as well as the other assaults around town, was him.

Carolyn returns to the Loomis House and William is there, dressed very nicely. William tells her he was invited to Collinwood by Alexis. The two argue about the Angelique/Alexis situation, as well as Barnabas, who is still chained up in the basement. Carolyn wants to release him, but William still plans to use him to write a big-selling book. William soon leaves for Collinwood to meet with Quentin.

While sleeping, Sabrina has a strange dream where she relives her attack from the previous night. She wakes up abruptly and screams.

At Collinwood, William visits Alexis, who apparently has enjoyed his company very much. As Carolyn eavesdrops outside the drawing room doors, William offers to take her out to dinner and show her around the estate. A distraught Carolyn leaves as William and Alexis hold hands.

Carolyn goes to Sabrina's house and notices she is missing.

Meanwhile, Cyrus is going over his notes from the previous night, but he still can't remember anything. Carolyn shows up and scolds him for leaving Sabrina by herself, because now she is missing. The two decide to stop arguing and go look for her.

Sabrina is standing outside the front door at Collinwood, thinking to herself, "This is where it all began." She enters the drawing room and sits down at a table and acts as if she is about to begin a séance.

Dark Shadows - Episode 989 on the IMDb 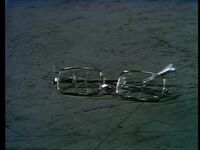 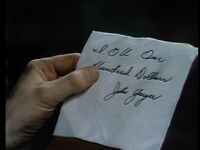 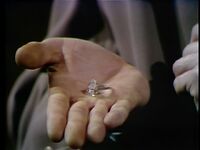