Trying to learn the truth about Alexis, Bruno decides to exhume Angelique's body.

In a strange room in the east wing of Collinwood, Barnabas Collins discovered the existence of another level of time. The people he saw in the room were all people he knew, and yet they were leading completely different lives. Through some mystifying warp in time, Barnabas became part of this other existence. Only to discover that he had placed himself in great danger. For a man named William Loomis discovered Barnabas' darkest secret. And now Barnabas Collins lies trapped in a chained coffin. And he has no way of knowing what strange and terrifying things are happening in this world of Parallel Time.

Convinced that Alexis is really Angelique, Bruno enters the crypt where she was buried and starts to open her tomb. He is immediately caught by Quentin and Alexis.

Quentin orders Bruno to get out immediately, but Bruno insists he is going to open it and prove to everyone that Alexis really is Angelique, once and for all. Quentin steals his hammer and offers him $25,000 for the deed to his cottage and to leave Collinsport forever. Bruno makes a counter-offer, and proposes he can open Angelique's tomb and if it's empty, he will leave the town immediately. Alexis immediately refutes the offer and Quentin kicks him out, but not before he tells him he will seal the entrance to the crypt. The two return to Collinwood.

Bruno arrives at Cyrus' lab and tells him what happened at the crypt. Cyrus is fascinated that Bruno thinks Angelique is still alive, but mocks Bruno for getting caught. Bruno gets frustrated and leaves, declaring he will find out the truth about Alexis.

Later that evening, Horace returns to Cyrus' lab, where he finds Sabrina. Horace is looking for Cyrus, and Sabrina goes to look for him. While she is upstairs, Horace goes to the back entrance and unlocks the door. Sabrina returns and tells him that Cyrus isn't around and she is closing the lab for the night, so Horace reluctantly leaves.

Meanwhile, Alexis is getting ready for bed when Bruno breaks in and demands to know the truth.

Bruno says all he wants is a confession from Alexis that she is Angelique, but Alexis laughs and says she only feels sorry for him. He confesses that he was in love with Angelique, but he is again rejected by Alexis. She threatens to use force to get him to leave. Bruno dares her to, and she runs out of the room.

During the night, Horace enters Cyrus' lab using the back door which he unlocked earlier. He opens the desk and finds Cyrus' journal, and he begins to read it.

Alexis rushes into the drawing room and tells Quentin that Bruno has returned to the house. Bruno shows up and taunts Quentin about how he knew Angelique better than Quentin actually did. He finally leaves, but vows he will return the next day to continue searching for the truth.

Horace is still reading Cyrus' journal, and eventually learns that Cyrus is preparing a potion that will separate the good and evil in a human being. He is shocked at what he reads, and then hears the upstairs door open followed by footsteps coming down the stairs.

Cyrus enters the lab and notices that his desk is open and his journal has been read through. After inspecting the lab, he catches Horace hiding in a corner, and Cyrus says he knew that Horace couldn't be trusted. Horace admits he knows about Cyrus' experiment, and offers to help him. Cyrus rejects his offer, but Horace thinks Cyrus is about to embark on a "lonely and dangerous journey."

Quentin and Alexis are discussing Bruno in the drawing room. Alexis asks Quentin about the seance that resulted in the death of Angelique. Quentin doesn't seem to want to talk about it, but agrees to tell her, since she has the right to know about how her sister died.

At the lab, Cyrus finishes a potion and writes in his journal that he is prepared to drink it and is aware of the consequences it might bring. But before he can drink it, Sabrina shows up, saying she noticed the light was on and she wanted to see him. Cyrus tells her that his experiment is almost complete, and she agrees to leave him to his work. Cyrus drinks the potion and he collapses to the floor in pain.

Cyrus: But Bruno, sometimes I wish I had your daring. You are an endless source of wonder to me.

Bruno: How long are you gonna just stay cooped up in your own tiny little world?
Cyrus: Your world is the one that is small and narrow, Bruno...because there is no one in it, really...except you. However, my world is open to expansion, and expand it shall...very soon.

Alexis (to Bruno): Anyone who would mold his life around the belief that a loved one can return from the grave only deserves to be pitied.

Dark Shadows - Episode 988 on the IMDb 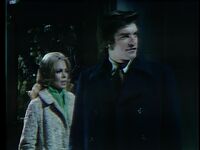 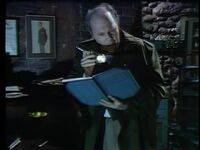 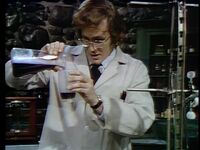