Horace Gladstone brings Cyrus a special chemical that he ordered; Horace is curious as to its intended use.

The great estate of Collinwood appears peaceful this day, but it conceals a puzzling mystery. Another Collinwood exists in time concurrent to its own. There the Collins family compiles of a different history. But the one man who has passed over through some warp in time is unable to participate in or even witness it. Barnabas Collins remains in a chained coffin, a captive of a man named William Loomis. While all around him, mystery deepens concerning the presence of a stranger, the twin of Quentin Collins' former wife, Angelique.

Quentin enters Angelique's room in the East Wing and finds Alexis crying and playing the piano. Alexis tells him she isn't sure why she is getting emotional, but Quentin says it's alright and he kisses her.

Alexis pulls away and Quentin immediately apologizes. Alexis is crying and tells Quentin that he thought she was Angelique and decides it is better if she leaves Collinwood because she is tired of everyone thinking she is Angelique, and believes that Maggie would then come back and resume her marriage with Quentin. Quentin manages to convince her to stay and promises that those living at Collinwood will treat her differently from now on.

Bruno is with Sabrina Stuart (Cyrus' lab assistant) in Cyrus' lab. Bruno tries to romance her, but she rejects his advances and Cyrus shows up. He asks Sabrina to go upstairs and wait for someone who is bringing a package for him. Bruno is surprised that Cyrus isn't upset with him, knowing that Cyrus cares deeply about Sabrina, but Cyrus says he needs Bruno for a top secret experiment he is working on, which Bruno seems very suspicious about.

Bruno continues to ask questions about Cyrus' experiment, but Cyrus manages to dodge around the subject. Bruno then tells him he is about to begin an experiment of his own, one that involves people who have died coming back to life. Cyrus is very intrigued and guesses it has something to do with Angelique, but Bruno refuses to go into further detail. Sabrina then returns and tells Cyrus that a package has arrived, but the man delivering it has requested to see him. Cyrus orders Bruno and Sabrina to leave and a man walks in, who identifies himself as Horace Gladstone. Cyrus is upset that he came all the way from Boston to see him, but he was curious to meet the person who ordered such a dangerous and complicated chemcial. Horace explains to him that he isn't active in the field of chemistry anymore because he "came too close to learning things that were better off undiscovered" and advises Cyrus to do the same.

Meanwhile, Bruno is at his cottage and on the phone with a travel agency. He learns that no one by the name of "Alexis Stokes" arrived on any ships entering Collinsport within the last week. He smiles and hangs up the phone, and is then choked by an unseen force.

Bruno rushes to the East Wing at Collinwood and demands Alexis remove the curse from him, thinking there is probably a voodoo doll somewhere. Alexis has no idea what he is talking about and angrily orders him to leave. He finally starts to feel better and then asks why she lied about how she came to Collinsport. Appalled by the fact he is accusing her of lying, she says she arrived on a private yacht and again asks him to leave. Alexis scolds Bruno telling him to leave her alone and threatens to send Quentin after him.

Cyrus and Sabrina are working at the lab. Sabrina goes to a cabinet to get equipment and finds an engagement ring. She asks Cyrus if it was meant for her, to which he says yes and she happily accepts his marriage proposal. Shortly thereafter, Sabrina inquires about the new experiment he has been working on. Cyrus gets visibly nervous with her questions, but alludes to the fact he wants to separate the good and evil in mankind, which worries Sabrina.

Later that night, Bruno enters an abandoned crypt where Angelique is buried, and he begins to open the tomb.

Sabrina: Before I throw my arms about you and make a fool of myself, it is an engagement ring, isn't it?
Cyrus: Well, I hope so.

Cyrus: No one has ever found an abstraction in a test tube...at least not yet. Good...evil...I'll never find that here.

Alexis: It wasn’t easy being her sister, believe me. Everything was so easy for her, and nothing was easy for me. Especially imitating Angelique, and I tried to do that, believe me! What woman wouldn’t want to be all that she was?

Dark Shadows - Episode 987 on the IMDb 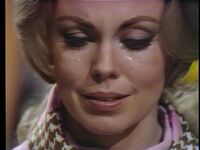 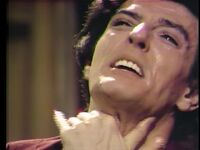 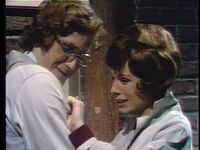