In a deserted room in the east wing, Barnabas Collins has discovered an incredible world which exists in another timeband. And now he has stepped into that timeband, and found those he knows and loves living other lives, faced with other problems. Maggie Evans is now the bride of Quentin Collins, but her marriage has brought her only misery, for she must constantly fight the ghost of Quentin's first wife, Angelique. But Maggie is determined to win the fight, no matter what the cost, and take her rightful place as Mistress of Collinwood.

Maggie heads downstairs to search for Quentin. As she approaches the drawing room, she sees Quentin speaking to a woman who looks like Angelique.

Maggie runs to her room, not knowing what to do next. Quentin soon arrives and wonders why she is so frightened. He explains that the woman is Angelique's twin sister, Alexis Stokes. Despite learning she isn't actually Angelique, Maggie doesn't want anything to do with her, which upsets Quentin.

Chris is speaking with Cyrus Longworth, a scientist and friend of the family, in his laboratory. Cyrus tells Chris how he saw a woman who looked exactly like Angelique in Collinsport, but Chris isn't sure if he believes him. Chris asks Cyrus why he has been working so hard in his laboratory lately. Cyrus confesses that he has been working on a chemical that can separate the good and evil in a human being. Chris doesn't seem very excited about the experiments. Cyrus asks Chris if he could retrieve her address book for him at Collinwood, as there is a scientist in Boston he wants to get into contact with.

At Collinwood, Alexis tells Quentin she feels she shouldn't stay at Collinwood, because she has upset Maggie so much. Quentin tells her that he is now the Master of Collinwood, and he invites her to stay at the house. Hoffman walks in and is shocked, exclaiming, "It's you!"

Quentin calms Hoffman down and tells her it's only Angelique's twin sister. Hoffman tells Alexis she had sent her a letter shortly after Angelique died, but she apparently never got it. Quentin asks Alexis why she came to Collinwood in the first place, and Alexis tells him it's because she felt she was "supposed" to come here. Alexis then says she is tired and wants to retire for the evening. Hoffman offers her Angelique's room. After the two leave, Quentin wonders if Alexis really is Angelique.

Chris is still telling Cyrus his concerns over his experiments. Cyrus again asks Chris for the name of the scientist he requested, but Chris refuses, and says he feels he needs to stop whatever it is Cyrus is planning on doing.

Hoffman takes Alexis to the East Wing. Once they are alone, Hoffman tells her that Angelique's room is "exactly the way you left it." Alexis is confused as to why Hoffman thinks she is Angelique, and convinces Hoffman that Angelique is dead and never coming back.

Hoffman returns downstairs and tells Maggie that Alexis is staying at Collinwood for the night, under Quentin's orders. Maggie heads to the drawing room and finds an empty bottle of sherry, presumably drunk by Quentin.

Meanwhile, Quentin approaches Angelique's room in the East Wing and walks in as Alexis is playing "Ode To Angelique" on the piano. Quentin is still stunned at how much Alexis looks like Angelique. Maggie walks in as the two are about to embrace, and immediately runs out. Quentin chases her back to the drawing room. Maggie shows her the letter she received from Angelique a few days ago and tells him that Will confirmed it was her handwriting. She is still convinced that Angelique is alive and controlling everyone in the house. The two become furious with one another, and Quentin tells her if she really feels that way, then she should leave Collinwood. Maggie sarcastically thinks it's a good idea and runs out of the house.

Hoffman: I understand you’re telling everyone about being a 'twin sister' --
Alexis: But I AM Angelique's sister!
Hoffman: But you don’t have to lie to me! I’ve always known you would come back, that’s why I’ve kept the room exactly the same as it always was!

Dark Shadows - Episode 985 on the IMDb 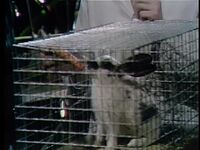 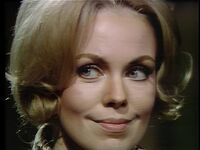 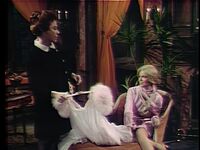 Angelique's Dress
Add a photo to this gallery
Retrieved from "https://darkshadows.fandom.com/wiki/985?oldid=143534"
Community content is available under CC-BY-SA unless otherwise noted.