Maggie buys the Ode To Angelique record for Daniel at Hoffman's suggestion, much to Quentin's fury.

In a strange room in the east wing of the great house at Collinwood, Barnabas Collins discovered the existence of another level of time. The people he saw in the room were all people he knew, and yet they were all leading completely different lives. They were living in a world of Parallel Time. Through some mystifying warp in time, Barnabas became a part of this other existence, but he soon discovered he had placed himself in great danger, for a man named William Loomis discovered Barnabas' darkest secret, and now Barnabas Collins lies trapped in a chained coffin. There is no one to help him, and he has no way of knowing what strange and frightening things are happening in this world of Parallel Time.

In Angelique's room, Daniel taunts Maggie and tells her that Angelique will return very soon. Maggie gets upset and leaves, but hears a humming sound coming from the portrait. Maggie runs out of the room and Amy enters from the back entrance. Amy tells Daniel she wasn't the one who was humming.

Daniel is more convinced than ever that Angelique is coming back from the dead, but Amy thinks he is crazy. She runs out of the room, but Daniel is satisfied with what has transpired.

Maggie rushes to the drawing room and asks Hoffman where Quentin is. Hoffman tells her that Quentin doesn't like to be disturbed when he's working, but he shows up in the drawing room anyway and kicks Hoffman out. Maggie confesses she was in Angelique's room because Daniel told her that Quentin would be there. Quentin tells her he has not been in Angelique's room since she died. Maggie tells him she heard a hum coming from the portrait. A furious Quentin leaves to go find Daniel. Hoffman returns and tries to console Maggie. She suggests she buys a record for Daniel.

Quentin is in Daniel's room, yelling at him for scaring Maggie. Quentin punishes David and says he is no longer allowed in the East Wing.

Maggie returns to Collinwood following a shopping trip. She tells Quentin she has a surprise for Daniel.

Hoffman goes to Daniel's room to try to cheer him up. Daniel tells her he heard Angelique through the portrait, which excites Hoffman. Hoffman tells Daniel there is still hope for her return, and they must not give up.

Amy greets Maggie with flowers and tells her to continue to be patient with Daniel. Daniel walks in and Maggie gives him his surprise: a record. She plays the record and the song horrifies Amy, but greatly pleases Daniel. Quentin rushes in and abruptly stops the record. He scolds Maggie and she runs out of the house. David smiles and says to himself, "She'll never be my mother."

Maggie blows up on Hoffman for the record idea. Quentin overhears the argument and also scolds at Hoffman, but Hoffman says she was only trying to help improve the relationship between Daniel and Maggie. Quentin orders Hoffman to apologize to Maggie, and tells her to never mention Angelique's name again.

Hoffman finds Maggie in Angelique's room. She apologizes to Maggie, but then starts talking up Angelique again. Maggie gets tired of listening to Hoffman and leaves. Hoffman speaks to the portrait and begs Angelique to return.

Maggie walks downstairs to find Quentin. She approaches the drawing room and sees Quentin talking to a woman who looks like Angelique.

Barnabas: What do people actually know about Angelique?

Barnabas: It's all so similar. And yet so different.

Maggie (to Hoffman): You're the only person I've ever met who can turn an apology into a testimonial.

Dark Shadows - Episode 984 on the IMDb

Dark Shadows Every Day - Episode 984 - What We Know 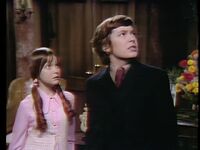 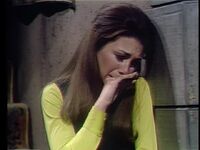 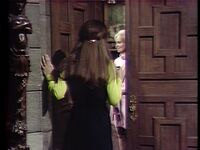 Mysterious Stranger
Add a photo to this gallery
Retrieved from "https://darkshadows.fandom.com/wiki/984?oldid=142486"
Community content is available under CC-BY-SA unless otherwise noted.