Will confronts Barnabas at his coffin with a cross and chains him in with plans to write a new book.

Though the great house of Collinwood looks the same, everything that happens in it is different this night. For Barnabas Collins is trapped in Parallel Time. He has entered another time band, running concurrently with ours, and to his amazement he discovers a Collinwood ruled by the memory of a dead mistress: Angelique. And a new bride has entered the house, wanting to find happiness with Quentin, but instead finding an enemy she can not fight.

Maggie is sitting by herself in the drawing room, wondering where Quentin might be. Soon, someone slips a note underneath the closed doors. Maggie goes to inspect the foyer, but no one is there. She opens the letter, which says, "You are not wanted here, now or never." The letter is signed by Angelique.

Maggie wonders who could have wrote the letter, and deduces it was a prank by someone in the house. Hoffman enters the drawing room, looking for Quentin. Maggie says he hasn't returned yet. Hoffman informs her that her room is ready and apologizes for her behavior earlier in the day.

At the Loomis House, Barnabas tells Carolyn he doesn't think it's a good idea to keep his coffin in the basement, so as to avoid trouble with her husband. Will stumbles into the house, drunk after a night at The Eagle (a bar in Collinsport). Will immediately recognizes Barnabas as the one he wrote a book about, but Barnabas tells him he merely a descendant, and has traveled to the United States to visit him. Barnabas asks Will if he can rent a room in the house, but Will is skeptical since he has started writing a new book. Will says he will have to think about it.

At Collinwood, Maggie is in her bedroom and Quentin finally returns. Quentin apologizes for what happened earlier and insists she did nothing wrong. They decide to stop arguing and retire for the evening.

Back at the Loomis House, Barnabas tells Carolyn he is worried about Will discovering his secret, and he will need her to guard him at all times.

The next morning, Hoffman asks Maggie if the rooms were fine for her and Quentin last night. Hoffman admits she was worried Quentin would get upset about how some things were set up. Maggie cautiously asks her what "her" room was like, and Hoffman says it's located in the East Wing, and it's the "best room in the house." Maggie then requests to see Quentin's son, Daniel Collins, but Hoffman tells her that he isn't feeling well. Quentin enters the room and greets Maggie, and then asks to see Hoffman alone. He demands to know how Daniel knew he had re-married (Daniel is apparently very upset and already resents Maggie). Hoffman tells him that Elizabeth informed Daniel about the marriage. Quentin decides he will have to have a talk with Daniel.

At the Loomis House, Will and Carolyn are arguing about Barnabas and how he obtained a copy of his book. Will wants to kick Barnabas out of the house, but Carolyn says they badly need the money.

Maggie is going through files in the drawing room, trying to find another sample of Angelique's handwriting. Hoffman walks in on her, saying it's time for afternoon tea. Will also arrives to meet Maggie, and Hoffman leaves the two alone. Will tells Maggie she must not trust Hoffman, no matter what.

Will tells Maggie that there are a lot of secrets in the house, and the spirit of Angelique still controls Collinwood. Maggie shows him the letter from Angelique; Will confirms the handwriting is hers.

As dusk falls over the Loomis House, Barnabas is thinking to himself in the basement. He vows to not hurt any more people, regardless of what timeline he is in. Carolyn enters the basement, saying she knows Barnabas "needs" her. After a brief argument, Barnabas gives in and bites her.

At Collinwood, Maggie enters the East Wing and approaches Angelique's room. She hears Hoffman talking in the room, but she comes out before Maggie can enter. Hoffman tells her she shouldn't be in the East Wing (because it hasn't been set up for her and Quentin yet), and she escorts Maggie downstairs.

Will and Carolyn are again talking about Barnabas at the Loomis House. Carolyn faints and Will discovers the bite marks on her neck.

The next morning, Will confronts Barnabas at his coffin with a cross and demands to know all about him. Barnabas admits he is from another time and he is the original Barnabas Collins who lived in the 18th century, and explains how he obtained his book. Will says he won't kill him, but he instead is going to take him prisoner, and use him to write a new book. He forces Barnabas into the coffin and chains it up.

Will: Oh, honey, I'm a loser. You know some people...everything sticks to...like fame and fortune. Me? Well, I'm just the opposite. Yes, sir. I can't even keep the bottle full.

Will: You see, this house is full of hornets. You've got to step carefully.

Maggie: I don't believe in ghosts, Mr. Loomis.
Will: This is the house for them.

Dark Shadows - Episode 982 on the IMDb 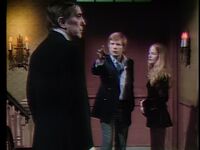 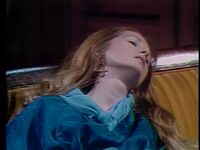 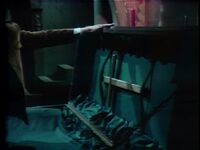 Cross
Add a photo to this gallery
Retrieved from "https://darkshadows.fandom.com/wiki/982?oldid=142477"
Community content is available under CC-BY-SA unless otherwise noted.