A terrible atmosphere of impending doom hangs over the great house at Collinwood. On this night, Carolyn Stoddard Hawkes has had a frightening dream, in which she witnessed the death of her husband Jeb on Widows' Hill. Believing the dream to be an omen of tragedy, Carolyn has left Collinwood and gone to Widows' Hill.

Carolyn arrives at Widows' Hill and searches for Jeb. He isn't there, but Sky appears instead. He approaches Carolyn and starts to strangle her.

Jeb shows up at Widows' Hill right before Sky can kill Carolyn. After a brief struggle, Sky pushes Jeb off the cliff, killing him.

Barnabas is in the drawing room at Collinwood when Julia arrives. Julia has just returned from examining Sabrina at Chris's cottage and informs Barnabas that she is very weak. She scolds Barnabas for biting Sabrina, but admits that her failed injections are partially to blame. She tells Barnabas that people in town, especially women, are becoming worried they will be attacked if they go out at night. Barnabas then tells Julia that for the last hour he has thought of nothing but the room in the East Wing, and admits he has contemplated trying to enter Parallel Time so he won't hurt anyone else, and perhaps save Sabrina's life. Julia is skeptical of the idea and doesn't want to lose Barnabas, possibly forever. Moments later they hear the door slam. Carolyn wanders into the foyer, in tears and in a state of shock. Elizabeth comes down the stairs and Carolyn tells her Jeb is dead. Julia offers her a sedative but she screams at her and says she doesn't want it. Barnabas also offers to talk to her, but Carolyn yells at him as well, saying he always hated Jeb. Carolyn explains to everyone the dream she had, revealing that Sky was involved in Jeb's death. Barnabas quickly leaves the house.

Carolyn finally manages to fall asleep in the drawing room, and Elizabeth decides to call the police to warn them about Sky. Julia then realizes that Barnabas is missing, and wonders where he could have gone.

Meanwhile, Sky is back at Bruno's apartment, quickly packing his things. Barnabas appears to him and demands to know if he killed Jeb or not. Sky finally confesses that Nicholas made him do it, and wonders why Barnabas even cares about Jeb to begin with. Barnabas tells him he only cares about Carolyn, but now that Jeb is dead, Sky must die. Sky grabs a gun and shoots Barnabas twice, but the bullets have no effect on him. Barnabas approaches him as Sky begs him to let him live. Barnabas grabs Sky's arm and turns the gun toward Sky. Barnabas uses Sky's finger to press the trigger and Sky is killed.

At Collinwood, Elizabeth hangs up the phone from the police as Barnabas and Julia look on. Elizabeth tells them that the police were unable to find Jeb's body, and assume that it has washed out to sea. Sky's body has also been found and was ruled a suicide, although the police are suspicious that Sky died of only one bullet wound, when three bullets were actually fired. Julia immediately suspects that Barnabas knows what happened, and soon confronts him about it after Elizabeth leaves to go be with Carolyn. Barnabas admits he played a role in Sky's death, but soon it will be but a distant memory. As the two talk in the foyer, Barnabas again feels the strong urge for blood, and decides to go upstairs to the East Wing in hopes of escaping.

Meanwhile, Carolyn is still sleeping in the drawing room. She has a dream in which she is at Widows' Hill and Jeb appears to her. Carolyn wants to embrace him, but Jeb says she can't because he is dead. Jeb tells her that he loves her and they will meet again, and he falls off the cliff.

Barnabas arrives at the Parallel Time room in the East Wing and the room is empty. He enters the room and thinks about how he feels that he belongs in the other timeband because he lived a normal life. After he gazes at the book about his life in the other world, he looks up and notices that the room has changed, and that he has crossed into Parallel Time. He sees Julia from the original timeband on the outside of the room, but she can't enter and Barnabas can't hear her. Carolyn enters the room and demands to know who he is.

Julia: I'd better give her a sedative.
Carolyn (screaming): I don't want a sedative! I only want Jeb!

Jeb: Carolyn! Carolyn, where are you? I must see you one more time. Carolyn! Carolyn! I must see you. Carolyn! Carolyn, can you hear me? Can you hear me?
Carolyn: I can hear you, Jeb. But where are you? I want to see you.
Jeb: I'm over here, Carolyn.
Carolyn: (happy) Jeb. You've come back to me...
Jeb: ...to tell you something. But then I must go.
Carolyn: No, I don't want to lose you. (steps forward)
Jeb: No, don't come any closer, Carolyn.
Carolyn: Why not?
Jeb: Because I don't really exist.
Carolyn: (giddy) Oh, but you do. I can see you. You're alive. And everything's going to be alright now.
Jeb: Listen to me, Carolyn. I want you to know how much I love you.
Carolyn: I know that, Jeb. And I love you.
Jeb: I couldn't die without telling you that someday we're gonna meet again, and you'll know when it happens. And I will know. And it will be different then.
Carolyn: No, I don't want to lose you, Jeb.
Jeb: I must go. But remember what I said.
Carolyn: (distraught) No, I don't want memories. I want you.
Jeb: We will meet again. We will meet again! (falls of cliff edge, Carolyn screams)

Dark Shadows - Episode 980 on the IMDb 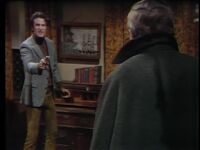 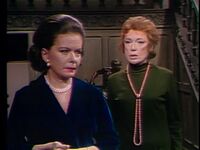 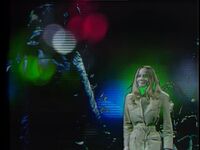