A dark night. A figure moves through the silent forest on the estate of Collinwood, a man on a desperate mission. For to save himself, Jeb Hawkes must turn the shadow onto the devil's emmisary, Nicholas Blair, and Angelique has warned Jeb what a dangerous move this is. Nicholas is very aware of the shadow and what it means, and so Jeb must trick him into accepting him.

Jeb visits Nicholas with the shadow cutout and decides he must put it on Nicholas.

Jeb admits he knew it was a mistake to destroy the Leviathan Box, but explains to Nicholas he is in love with Carolyn and he only wanted to be human. He tells Nicholas he needs his help because he can't deal with the shadow, and says he will do anything Nicholas wants him to do in order to get rid of it. Nicholas and Jeb share a drink now that Jeb is his servant. Nicholas asks Jeb where the shadow cutout is and Jeb says it's at Collinwood. Eager to place the shadow on someone else, Nicholas says they must be very careful and hypnotizes Jeb. While in the trance, Nicholas calls Jeb's bluff and tells him he knows he is lying about working together to transfer the shadow to someone else, and that he will still try to kill him and Carolyn. Jeb manages to break out of the trance and puts the shadow cutout onto Nicholas' heart. Jeb quickly runs out of the room, and the shadow appears to Nicholas. The shadow quickly attacks and kills him. Sky rushes into the room and finds Nicholas' dead body.

At Collinwood, Roger is pleading with Carolyn to tell him what is wrong, but Carolyn still refuses and breaks down in Roger's arms.

Jeb sneaks back into the house, but Sky chases him away, saying Nicholas is dead and that Jeb ruined everything. Once Sky is alone, Nicholas' ghost appears to him and says that even though he is now all alone, he must avenge Nicholas and all of the Leviathans who have died by killing Jeb.

Nicholas' ghost tells Sky that even though he is dead, he still has some powers left. Sky agrees to do whatever must be done to kill Jeb.

Jeb returns to Collinwood, wondering if the shadow will be waiting for him. He cautiously enters the darkened house and turns the lights on. Jeb walks throughout the house and doesn't see the shadow, and excitedly calls out for Carolyn. Carolyn rushes downstairs and Jeb exclaims it is all over, but he had to kill Nicholas in order to save himself. Jeb wants to plan a trip outside of Collinwood to get away from everything, but Carolyn wonders if he'll just find someone else there who hates him as much as Nicholas did. She is skeptical at first, but Jeb assures her the shadow is gone. Carolyn goes upstairs to tell Elizabeth they are leaving, and Jeb goes into the drawing room. While he is alone, he hears Nicholas' voice, which tells Jeb that the dead will never let him leave Collinwood. Jeb again gets nervous and prepares to leave, but David walks in, looking for Roger. Jeb tells David that he and Carolyn are getting ready to leave on a trip, and hastily leaves the house.

Meanwhile, Roger is in the East Wing and again sees Parallel Time. When he opens the doors, he sees David talking to the portrait of Angelique. Roger calls out to him, but the boy refers to himself as Daniel. Carolyn walks in and scolds him for being in Angelique's room. Daniel claims that his mother Angelique will return soon, but Carolyn tells him to stop thinking that, and soon Quentin will return and Daniel will have a new mother. Daniel gets furious with Carolyn and says he will never acknowledge the fact, he will never have a new mother. Carolyn goes to close the doors so Amy and the servants won't hear him. Roger opens the doors again and the room is empty.

Roger is standing in the Parallel Time room. He is determined to find out more about the Roger Collins who lives in the other world that is so close to his own.

In the drawing room, David explains to Carolyn that Jeb said she was leaving tonight, but Carolyn is confused because Jeb never specified to Carolyn when they were leaving. Roger comes in and tells David he needs to go to bed, but is surprised to hear that Carolyn has plans to leave Collinwood.

Later, Carolyn falls asleep in the drawing room and has a dream where Nicholas tells her that Widows' Hill is "where it will all end." She sees a vision of Jeb waiting for Carolyn on the edge of the cliff. Jeb hears someone coming and Sky appears. He tells Sky that they are both free now that Nicholas is dead, but Sky says Jeb took away everything he had when he destroyed the Leviathans. The two fight and Sky pushes Jeb off Widows' Hill. Carolyn wakes up, screaming, and rushes out of the house. Right as she leaves, Jeb arrives, all packed up and ready to leave. David tells Jeb that Carolyn just left to go to Widows' Hill, which shocks him.

Carolyn arrives at Widows' Hill and Jeb isn't there. Instead Sky appears and he starts to strangle her.

David: All I know is that when I grow up, I'm leaving. I'm going where the action is.

Dark Shadows - Episode 979 on the IMDb 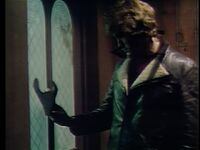 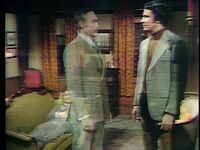 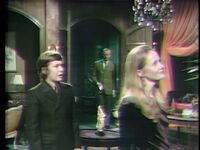