Angelique tells Jeb how to get rid of Nicholas.

A strange, disquieting night on the great estate of Collinwood. For Julia's injections have failed to cure Barnabas and free him from his curse. Instead he feels the need for blood more strongly than ever before. And fight it though he does, the lust is too strong for him, as one woman, seeking his help, found out.

Sabrina returns to Chris' cottage in a very dazed state. Chris notices she isn't feeling well and she faints. He examines her and notices the bite marks on her neck.

Sabrina refuses to tell Chris what happened to her, but she wants him to contact Julia immediately. Chris phones Collinwood, but Julia isn't there. Instead Quentin answers, who says he is on his way.

At the Old House, Barnabas feels very guilty for what he has done. He still has an incredible urge for blood, but vows to stay at the Old House until the urge goes away. He walks into the drawing room and begins to light the candles. Jeb, who is sitting in a chair, stops Barnabas from lighting anymore, and together they see the shadow. Jeb reveals that Angelique has put a shadow curse on him that will eventually kill him.

Nicholas and Angelique are talking at Bruno's apartment. Nicholas doesn't seem the least bit concerned that Bruno, Megan, and Philip are now all dead, because he still has one loyal follower: Sky. He then thanks Angelique for putting the shadow curse on Jeb, since he needed to dispose of Jeb and Angelique has done it for him. His comments seem to irritate Angelique, and he accuses her of still being in love with Barnabas.

Quentin arrives at Chris' cottage and notices the bite marks on Sabrina's neck. Chris suspects that Quentin knows what has happened to her.

Quentin tries to pretend he knows nothing. He tells Chris to stay with Sabrina and hopefully she will feel better soon. Quentin makes up a lie and leaves the cottage.

Jeb is pleading with Barnabas to help him because he doesn't have much time left. Barnabas tells Jeb that Angelique doesn't do any favors for anyone, but he will at least try to talk to her for Carolyn's sake. Quentin shows up and demands to talk to Barnabas. Jeb goes back to Collinwood, but not before he and Quentin exchange unfriendly glances. Quentin confronts Barnabas about what he did to Sabrina, but Barnabas insists he didn't want to harm her and he couldn't help himself. Barnabas says Julia's injections have failed and now the urge for blood is greater than ever before. He then tells Quentin that they have to help Jeb. Quentin scoffs at the idea and would rather see Jeb die, but Barnabas feels he owes him his help because he saved Carolyn and he is in love with her. Quentin reluctantly agrees. Barnabas approaches the candles and summons Angelique.

Angelique later appears the Old House and wonders why she should help Carolyn. Barnabas tells her that Jeb isn't responsible for what happened to her marriage, but Nicholas is. Jeb was the one who told Angelique about Sky being a Leviathan, and if it wasn't for him telling her that, Nicholas may have destroyed her. She agrees to speak with Jeb and tells Barnabas to bring him to the Old House.

While Jeb and Angelique are talking at the Old House, Barnabas tells Quentin there is something else he must know about. Barnabas takes him to the East Wing and together they see Parallel Time. Quentin notices the picture of him and David on the table, and wonders what is going on. Soon, a strange man who looks like Jeb walks in. The man retrieves a small book from a dresser and begins flipping through the pages. Chris walks in and refers to him as "Doctor," and notices he is going through Angelique's address book. The doctor claims he had lost an address that Angelique gave him before she died and he was merely looking for it. Chris tells him that he has strict orders not to allow anything to be removed from Angelique's room without permission from Julia Hoffman. The doctor gives the book back to Chris and he puts it back in the dresser. Chris then closes the doors near Barnabas and Quentin. Quentin opens the doors again and finds the room empty. Barnabas tells him he has just witnessed Parallel Time.

Angelique and Jeb are talking in the drawing room at the Old House. Jeb begs her to take the shadow off him, but Angelique says she can't and that the shadow must kill someone. Angelique informs him that he can transfer the shadow simply by placing the cutout on someone else's heart. Jeb becomes very intrigued, but isn't sure whom he should kill. Angelique suggests their mutual enemy, Nicholas, and mentions he knows all about the shadow.

Chris is still unsuccessful in trying to reach Julia. He tells Sabrina he is going to the hospital and tells her not to leave.

Barnabas is by himself at the Old House and hears a knock on the door. He becomes very afraid, and Sabrina soon walks in, confirming Barnabas' fears. Barnabas desperately tries to get her to leave, but Sabrina doesn't want to be anywhere else and knows Barnabas can't resist. He gives in and bites her again.

Meanwhile, Jeb arrives to see Nicholas, with the shadow cutout in his pocket. Nicholas lets him in and Jeb tells him they need to talk, perhaps for the last time.

Nicholas: Yes, you're right back where you were two hundred years ago...loving Barnabas Collins. Nothing ever changes for you, does it, Angelique?

Dark Shadows - Episode 978 on the IMDb 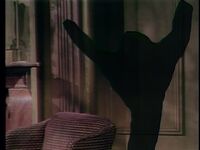 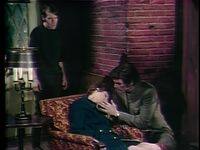 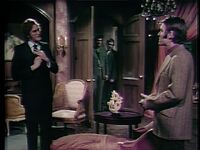