On this night, one of the inhabitants of Collinwood has seen the most incredible sight of his life. Roger Collins has looked into a room in the deserted east wing, and seen for himself what Barnabas has told him about. A separate existence in a separate time-band. In it, the inhabitants of the great house seem to be carrying on lives completely different and apart from those in this existence. He saw Elizabeth and Bruno, the Bruno who in this existence died only a few hours before. And in this room, on this night, Roger has seen someone who shocked him even more.

Roger takes Barnabas to the East Wing and explains what he saw, including seeing himself. They open the doors together and see Roger and Elizabeth in Parallel Time.

In Parallel Time, Roger is laughing at the fact that Quentin is bringing a new bride to Collinwood. He goes onto discuss how exquisite Angelique was, and he is convinced that she is why Bruno has come back. Chris then walks in, and refers to Elizabeth as his cousin. He is surprised to learn that Bruno has returned to Collinwood and will do what he can to kick him out. Roger is upset that Elizabeth and Chris treat Bruno this way, but Elizabeth reminds him that Quentin will soon be returning with "Mrs. Collins." Roger simply says that "Mrs. Collins" never left as he gazes at Angelique's portrait. Roger excuses himself, and begins walking towards Barnabas and Roger in the main timeband, he vanishes at the threshold of the room and the room changes. Barnabas admits to Roger he is drawn to the room, but he has to leave. Roger stays behind and ponders Parallel Time to himself.

At the Old House, Julia gives Barnabas another injection, and sadly tells him that this is the final injection she can safely give him. She won't know if the injections worked until the sun rises. Barnabas decides to wait til the sun rises, but before it does he feels a sharp pain and says something is terribly wrong.

Barnabas isn't sure how he feels, but he only knows that the injections aren't working. Julia helps him to his coffin.

Sabrina is waiting for Chris at his cottage. He arrives and Sabrina is thrilled to see him. Chris learns that Bruno was murdered during the night, and Chris realizes he was the one who did it. Sabrina tells him the police came and searched his house, and freed her and Sky. Sabrina wants to start planning their future now that Bruno is dead, but Chris is still against the idea. He leaves to go change his clothes, and Roger arrives at the cottage. He wants to speak with Chris, but Sabrina tells him he had a bad night and isn't feeling well. Roger doesn't seem to care and wants to see Chris anyway. Sabrina leaves and the two sit down. Roger asks him about how he escaped from Bruno's apartment last night and where he went, but Chris doesn't remember and says that Bruno drugged him. They talk about Bruno's death and how the answers may have went with him, but Roger says he will eventually get to the bottom of what happened, and why Carolyn was involved.

After Roger leaves, Sabrina re-enters the room and again asks Chris to marry her. Chris says it is out of the question until they find a cure for him.

That night at the Old House, Julia wonders what is going on with Barnabas. He rises from his coffin and tells Julia that he has never had such an urge for blood before, and he cannot help but destroy or be destroyed.

Roger and Julia are in the East Wing at Collinwood. The Parallel Time room is empty, and Roger is telling her of his fascination about seeing himself in a different life. Julia seems dis-interested, however. Elizabeth walks in, surprising the two, and she demands to know why they are in the abandoned East Wing, since everyone seems to be interested in the East Wing lately. Roger agrees to tell her everything he has seen.

Barnabas is still at the Old House, trying to resist the urge for blood. As he is about to go into town, he hears a knock on the door. He looks out the window and sees Sabrina. Barnabas decides to hide, hoping she will go away, but she lets herself into the house. Sabrina walks through the house and Barnabas finally gives in and reveals himself to her. She tells him about her plans to marry Chris, but Barnabas is paying no attention to her and is only staring at her neck. He finally gives in and bites her.

Sabrina returns to Chris' cottage in a dazed state. Chris wonders where she has been, to which she says she was only out for a walk. She collapses onto a chair and Chris finds the bite marks.

Barnabas: Never before have I felt such a creature of the night.

Roger (PT) (to Elizabeth PT): You really make me laugh, talking so earnestly, trying to figure out a plan to protect Quentin and his new little bride from big, bad Bruno and all the others.

Dark Shadows - Episode 977 on the IMDb 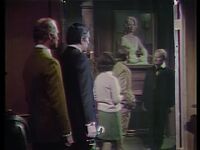 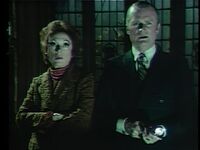 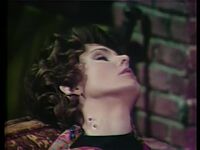 Bite Marks
Add a photo to this gallery
Retrieved from "https://darkshadows.fandom.com/wiki/977?oldid=142122"
Community content is available under CC-BY-SA unless otherwise noted.