The werewolf attacks Bruno; Roger sees himself in Parallel Time.

Soon night will fall over the great house at Collinwood, and Jeb Hawkes will be stalked again by the formless shadow that has been haunting him. Terrified for her husband's safety, Carolyn has responded to a telephone call from a man named Bruno, who has told her he knows a way of saving Jeb.

Carolyn arrives and meets Bruno. She tells him she will agree to whatever terms he has, so long as he can help Jeb. Bruno tells her the man who can save Jeb is in the next room. She enters and finds Chris on the floor, in terrible pain. She runs to his side, but he tells her to get out. Bruno locks the door and laughs, predicting that soon Jeb will have no reason to live.

Bruno is satisfied with himself for locking Carolyn in with Chris, right as he is about to turn into the werewolf. Roger arrives moments later, explaining that he saw Carolyn arrive. At first Bruno plays dumb, but then Roger overhears Chris's moaning and Carolyn's voice. Bruno tries to kick Roger out, but Roger takes a candlestick and knocks him out. He unlocks the door and finds Carolyn kneeling over Chris. Chris tells Roger to take Carolyn out and lock the door, and he obeys. He is about to telephone Julia when they hear a crash. They rush into the room and find the window broken and Chris gone. Roger quickly ushers Carolyn away. A moment later, Bruno wakes up, dazed.

Bruno investigates the room and notices the werewolf has escaped, and goes to search for Carolyn.

Elizabeth is in the drawing room, looking sad and troubled. Roger walks in and asks if she is still upset with Carolyn's marriage to Jeb. Elizabeth doesn't care to talk about the matter, but finally admits they need to do something about Carolyn. Carolyn soon enters, looking for Jeb. Elizabeth tells her he is at his cottage, and she leaves to go see him, much to their dismay. The two wonder why she has to keep everything a secret.

Carolyn is walking through the woods and Bruno appears to her. Carolyn tells him she is going to tell Jeb everything that happened at Bruno's apartment, and assumes Jeb won't be very happy about it. Bruno laughs at her, and says she won't be going to see him tonight, and reveals that he and Nicholas work together and it's been decided that the best way to get revenge on Jeb is through Carolyn. Bruno tells Carolyn he is going to kill her.

Bruno says he doesn't want to kill Carolyn, but he has no other choice. He begins to strangle her, but the werewolf appears and attacks Bruno. Carolyn screams and runs off.

Roger and Elizabeth are still in the drawing room at Collinwood as Carolyn rushes in, crying. She tells them that the werewolf has attacked Bruno, and Roger rushes out to investigate.

Roger finds Bruno in the woods, covered in blood. Bruno tries to explain to Roger about the werewolf, but he dies before he can finish. Roger returns to Collinwood and tells Elizabeth what has happened, and says the police are searching the grounds. He decides to head upstairs to bed, but says first there is something he must do for Barnabas, which has Elizabeth curious.

Roger goes to the East Wing and sees the room is lit up and in use, but he can't enter. In Parallel Time, Bruno is admiring the portrait of Angelique and recalls the day she sat for it, listening to the music he composed for her. Elizabeth walks in, angrily wondering why he is in the house. She tells him that Quentin will be returning soon and he had better leave before he comes back. Bruno mentions to Elizabeth he understands that Quentin has re-married, but Angelique won't let him bring a new bride into the house. Elizabeth scoffs at the fact that everyone still talks like Angelique is still alive. Soon Bruno leaves and Roger walks in, which shocks the Roger who is standing outside the door in the main timeband.

Dark Shadows - Episode 976 on the IMDb

Dark Shadows Every Day - Episode 976 - Another Another World 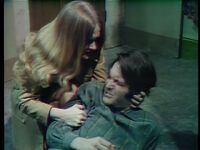 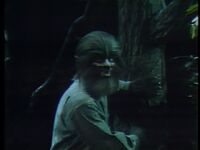 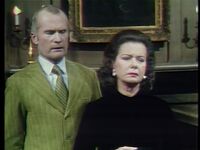