Barnabas sees counterparts of Roger and Carolyn in the Parallel Time room.

The night before the moon is full. And in a house on the outskirts of town, Bruno holds Sabrina prisoner, hoping to lure Chris there. He plans to use Chris as bait for a horrifying scheme, and Chris falls into his trap, as he comes to Bruno's to rescue his beloved.

Bruno captures Chris and taunts him about always being one step ahead of him. Chris attempts to attack Bruno, but Bruno knocks him down and points a knife at him.

Bruno holds the knife to Chris' throat and forces him to sit down. Chris only wants to know where Sabrina is. Bruno goes to the door of the back room and has Sabrina assure him she won't try to escape. He unlocks the door and Sabrina is standing in the doorway. She begs Chris not to worry about her and he should try to escape. Bruno mocks both of them for their "touching moment" and he locks Sabrina back up. Bruno assures Chris he won't kill her, but he will have to cooperate with him. Bruno tells Chris he will be holding him hostage until tomorrow night because there is someone he must kill (Jeb).

Barnabas is in the Parallel Time room, still wondering about the concept of Parallel Time, and he decides he must find out how to cross over.

Meanwhile in the drawing room, Carolyn and Roger are saying goodnight and Roger sees Barnabas coming down the stairs. Roger wonders why Barnabas is roaming around the house at such a late hour. Barnabas tells him there is a room in the East Wing he must tell him about.

At Bruno's apartment, Bruno continues to taunt Chris about the impending full moon. He again asks Chris for his help, but Chris refuses. He takes Chris into the room where Sabrina is being held and locks him up with her. The two wonder how they can escape.

Chris finds a window, but it is barricaded and the two realize they are powerless to Bruno.

At Collinwood, Barnabas finishes telling Roger of his findings in the East Wing. Roger is confused by the whole nature of Parallel Time, but he wants to see the room. Barnabas agrees to take him there on the condition he keeps it a secret. The two enter the East Wing and find the room empty, but Roger stills believes him. Roger leaves the East Wing and Barnabas says he'll go out a different door so he can get back to the Old House quicker. As Barnabas is leaving, he hears Roger's voice in the distance. He calls out to him, but he soon realizes it is coming from the Parallel Time room. Barnabas opens the door and notices the room has changed. He sees Roger drinking a glass of wine, talking to the portrait of Angelique. Roger confesses to the portrait that he only drinks the wine because it was her favorite, and that he thinks he was once in love with her. Carolyn then walks in, wondering if Roger is talking to himself. Roger seems upset to see her, and Carolyn scolds him for still visiting the "shrine" of Angelique, even though she's dead. Roger demands to know why she is in the room, and she tells him she is looking for her husband's book about Barnabas Collins, because a popular historical magazine wants to review it. Roger gets upset with her and asks her to leave the room immediately, mentioning that "Master Quentin" would not be happy if he knew she was in the room. Carolyn goes to close the doors, shutting out Barnabas once again. Barnabas re-opens the doors and finds the room empty once again. He thinks about what he has just seen, and wonders what strange world he has discovered.

Bruno is still holding Chris and Sabrina captive as night approaches. He opens the back room and orders the two to come out. Bruno again asks him to cooperate with him, but he refuses and they both try to escape. He locks Chris back up and tells him he will soon have a visitor, and he takes Sabrina to a different location.

Later, Bruno phones Carolyn at Collinwood, claiming he has found a way to have the shadow removed from Jeb. Carolyn doesn't believe him at first but eventually tells him they will be on their way to see him. However, Bruno tells Carolyn she must come alone since the person who can remove the shadow neither likes Jeb nor cares what happens to him. Carolyn hangs up and leaves the house, much to Roger's dismay.

Bruno speaks to Chris as nightfall is imminent. He tells Chris that he'd better not make any noises when the transformation occurs or else he will harm Sabrina. Soon there is a knock at the door and Carolyn enters. She wants to know who can help Jeb, and he takes her into the room where Chris is, who is starting to undergo the transformation. Chris begs her to get out, but Bruno has locked her in and claims that soon Jeb won't have anything to live for.

Carolyn (PT): She is dead. If I make her whirl in her grave, so much the better.

Dark Shadows - Episode 975 on the IMDb 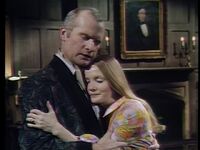 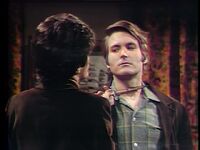 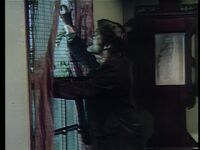