Strange and frightening events have occurred on this night in and around the great house at Collinwood. Inside the house, a young man named Jeb Hawkes has been subjected to a kind of terror he has never known before: a mysterious shadow that threatens to destroy him. And in a small house on the edge of town, Sabrina Stuart has confronted a man known only as Bruno. A man capable of killing the one she loves.

Bruno rejects Sabrina's bribe to leave town forever and forget about Chris. Sabrina pulls a gun on him and tells him she is going to kill him.

Sky enters the room and distracts Sabrina. Bruno takes advantage of the situation and knocks the gun out of Sabrina's hand. Bruno orders Sky to take Sabrina to the back room and lock her up. The two men momentarily argue about who gives the orders, but Bruno says he will have Nicholas deal with the situation unless he locks up Sabrina. After Sky takes Sabrina to the back room, Bruno goes to phone Nicholas, who arrives a little while later. Bruno takes Nicholas to the back room, where Sky is staying with the captured Sabrina. Nicholas asks who the girl is, and Bruno explains she is the fiance of Chris, and that Chris is the werewolf. Nicholas becomes very interested and thinks he can use the opportunity to redeem himself for the fact that the Leviathans were destroyed. Bruno also tells him that Angelique is trying to kill Jeb, but Nicholas wants to kill Jeb himself, and he feels that Carolyn's love is the only thing keeping Jeb alive. Nicholas prepares to tell Bruno how they will use Chris to defeat Jeb once and for all.

Meanwhile, Jeb is sitting in the drawing room at Collinwood by himself when there is a knock on the door. It's Chris, who is anxiously looking for Sabrina. The two awkwardly exchange pleasantries, but Jeb tells him she isn't there, and he leaves.

At Bruno's house, Sabrina and Sky are still in the back room. Sabrina notices that the front room has fallen silent. Sky goes out to investigate and finds Angelique waiting for him.

Sky is stunned to see Angelique, but she tells him she has been keeping a very close eye on him. She mocks him for his string of bad luck ever since the Leviathans were destroyed, and calls him a "hasbeen" and "Nicholas Blair's slave." Sky is irritated with Angelique's behavior and tells him that it's only a matter of time before Nicholas does himself in, just like he always does, and then someone will put Sky out of his misery. Sky has no comeback for Angelique, and she leaves him to ponder his own future.

Nicholas shows up at Collinwood while Jeb hides in the darkened drawing room. He gives Jeb a stern warning that he will be the one to destroy Jeb since he ruined his plans for the Leviathans, not Angelique. Nicholas turns out the lights and hastly walks out of Collinwood.

Chris is at his cottage and speaking to Quentin on the phone. Quentin tells him he has a place to hide him during the full moon tomorrow, but Chris is more concerned about Sabrina's whereabouts. Just then there is a knock on the door, and Sky walks in. The two meet each other and Sky reveals he knows where Sabrina is. He tells him she has been captured by Bruno and Sky gives Chris her makeup compact as proof he was with her. Sky tells Chris he is tired of seeing Nicholas and Bruno hurt people, so he wants to help them both and he will just have to trust him. Sky gives him the key to Bruno's house and tells him to meet him later and they will set Sabrina free.

Jeb is still hiding at Collinwood. He decides to turn the lights on and again sees the shadow. He turns the lights back off and calls out for Angelique.

Sky returns to the room where Sabrina is being kept, and tells her that he and Chris will try to help her succeed. Bruno is eavesdropping outside the room and hears everything.

Bruno opens the door and asks to speak with Sky. Bruno wants to know where Sky went and why he was gone for so long. Sky tells him he was just meeting an old friend, but Bruno doesn't believe him. Bruno warns him that he better not be lying or planning anything, because he and Nicholas are all he has left.

At Collinwood, Angelique appears to Jeb in the drawing room. Jeb pleads with her to take the shadow off him, saying he is married and loves Carolyn very much. Angelique simply reminds him that she loved Sky very much, and Jeb ruined their marriage. She says she won't remove the shadow and that soon the shadow will finish its growth and kill him, and she disappears.

Later that night, Chris sneaks into Bruno's house and finds Sky tied up in a closet. Sky only says "help me" before Bruno appears behind him and points a gun at him.

Jeb: Don't you have any feelings at all?
Angelique: I had them once. And they all died when I found out the truth about Sky.

Nicholas: One of us is going to finish you off. I only hope it’s me.

Dark Shadows - Episode 974 on the IMDb 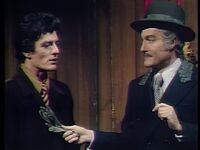 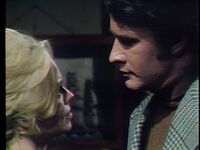 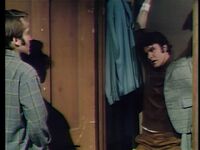 Strung Up
Add a photo to this gallery
Retrieved from "https://darkshadows.fandom.com/wiki/974?oldid=142110"
Community content is available under CC-BY-SA unless otherwise noted.