Sabrina tries to get Bruno to leave Collinsport and stop hunting Chris; he refuses, and she pulls a gun and threatens to kill him.

For some at Collinwood, this night has held the promise of new roles. Barnabas Collins has found himself drawn more and more to the room in the east wing, for another time band seems to exist. But for others, the night seems to have brought an unexpected end to hope. Jeb Hawkes has brought his new bride home, quarreled with her, and demanded she leave him alone. An unhappy Carolyn has gone to Collinwood, but unable to stay there, she returns to the Carriage House, to try find the answer to Jeb's incredible actions.

The next morning at Collinwood, Jeb finally explains to Carolyn what the shadow has done to him, and it each night it comes closer and closer to attacking him. Carolyn asks who put the shadow on him and initially wonders if it's Nicholas. Jeb doesn't want Carolyn to get too involved, fearing for her safety. He says there is something he must do and leaves, but not before re-affirming his love for her.

Quentin and Sabrina are in Sabrina's bedroom (sitting together on the bed). Sabrina reveals to Quentin there will be a full moon the next night, and still wants to help Chris, regardless of how many times he shuts her out. Quentin asks how she is going to help him and Sabrina says that she must "get rid of" Bruno, because he knows the secret. Sabrina tells Quentin she wants to marry Chris, but Quentin thinks it's a bad idea because the curse still exists. Quentin agrees to go and talk to Bruno later on.

Meanwhile, Jeb goes to visit Bruno. He enters Bruno's house without knocking. Bruno holds up a knife to him and demands to know what he wants.

Jeb is unintimidated by Bruno's threat. Bruno is still furious at Jeb for destroying the Leviathans. Jeb sidesteps the conversation and asks Bruno to talk to Nicholas for him, because he is in great danger. Bruno scoffs at the request, but Jeb goes on to tell him about the shadow that Angelique cursed him with, that he destroyed the Leviathans because he is in love with Carolyn, and now they're married. Bruno still seems disinterested in helping Jeb, and says regardless of what he does, he is going to die soon and Carolyn will be a young widow.

Carolyn is in the drawing room at Collinwood when Maggie rushes in, excited to see her. Maggie asks her how the married life is, but Carolyn doesn't seem interested in talking about anything that has been going on with Jeb. Jeb enters the room and Maggie excuses herself, as she has a dinner date with Barnabas. Jeb tells Carolyn his visit to Bruno was unsuccessful, but Carolyn remains optimistic that they will defeat the shadow.

Later that night, Maggie is about to leave to go see Barnabas and she notices she has the pitchfork symbol on her hand. She calls out for Quentin. At the same time at Sabrina's apartment, Quentin also notices the pitchfork symbol and wonders where Maggie is. Sabrina is upset that Quentin has stood her up and decides she will just have to deal with Bruno herself.

Sabrina decides to give Quentin a little more time to show up, but she realizes he isn't coming. She steals her brother's gun and goes to search for Bruno.

Quentin and Maggie are in the Collinwood courtyard, kissing passionately. Maggie says she has to go meet with Barnabas, but Quentin says he doesn't matter right now.

Inside the drawing room at Collinwood, the shadow appears to Jeb and Carolyn. Carolyn suggests going to Barnabas for help, but Jeb says he and Barnabas aren't exactly friends. She then suggests Professor Stokes, but Jeb feels that everything is hopeless, and Carolyn becomes increasingly frustrated.

Sabrina arrives at Bruno's house. Sabrina and says they need to have an important talk and she doesn't have much time. Bruno is aware there is going to be a full moon the next night. Sabrina offers Bruno an undisclosed large sum of money to leave Collinsport forever and forget he ever knew Chris. Bruno briefly considers the offer, but then decides that Chris is far more valuable than any sum of money that Sabrina can provide. He tells Sabrina is going to use Chris to deal with his enemies first, and then kill him. Sabrina then pulls out her gun and tells Bruno she is going to kill him.

Dark Shadows - Episode 973 on the IMDb 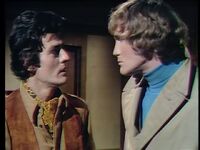 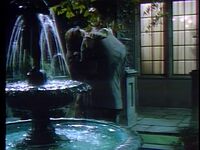 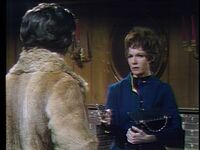 Girl with a Gun
Community content is available under CC-BY-SA unless otherwise noted.
Advertisement