Professor Stokes warns Barnabas about the danger of crossing into Parallel Time.

On this night, Barnabas Collins has been drawn to the room in the east wing, where he has twice before seen inhabitants of Collinwood living their lives in what seems to be a zone of Parallel Time. He has learned already that a strange and different Elizabeth and Julia are part of it. So is Angelique, so is Quentin. And on this night, he has just seen Julia quarrel with an uncannily changed Willie Loomis, and seen her throw a book at him. A book that has somehow done what Barnabas can not do: broken the time barrier.

Barnabas retrieves the book thrown from Parallel Time and the room changes. He examines the book and is horrified at its title, The Life and Death of Barnabas Collins.

Barnabas returns to the Old House with the book and begins to read it. Willie soon walks in and informs Barnabas that he has buried Megan and destroyed all of her possessions. He notices that Barnabas is looking at him "as if he's never seen him before." Willie sees the title of the book and asks who wrote it. Barnabas tells him that Willie himself wrote it, and shows him the biography on the back of it. Willie becomes upset and demands to know where the book came from, to which Barnabas says he found it in the East Wing. After much confusion, Barnabas shares his theory that there is more than one time band. Willie is especially confused by the inscription: "To the Cleo who inspires me." Barnabas explains to him that Cleo was the muse of history. According to the book, the Barnabas Collins of Parallel Time died in 1830, grieved by his wife, Josette Collins. Barnabas decides to show the book to Professor Stokes, but must read it first.

Professor Stokes is at Collinwood, just having finished dinner with Elizabeth. She informs him that Jeb and Carolyn have been married and she has no idea where they are. Elizabeth confesses that she is terribly afraid that Carolyn may be in danger.

Meanwhile, Jeb and Carolyn arrive at a new hotel room in an unknown location. Jeb turns on the light and immediately sees the shadow. He quickly turns the lights off and prepares to leave, but Carolyn stops him. Jeb tells Carolyn they can't stay here.

Carolyn finally tells Jeb she is sick of running from hotel to hotel and demands to know what is wrong with him. Jeb tells her she wouldn't understand even if he began to tell him, and tells her the honeymoon is over.

At Collinwood, Stokes and Elizabeth are still wondering where Carolyn might be. She eventually leaves the room, and Barnabas and Stokes begin talking about Parallel Time. Barnabas tells him he has seen strange visions in the East Wing, which has led him to believe that Stokes' theory is true. He shows him the book, which he says is the biography of his ancestor who lived in Parallel Time, and then discusses the differences between the two time bands. Stokes asks Barnabas to take him to the East Wing immediately, and the two ponder what their lives might be like in Parallel Time.

Barnabas takes Stokes into the East Wing, but the room is empty. He tells Stokes he has thought of "crossing over," but Stokes says it is far too dangerous and he must not do it, for it may destroy him.

Jeb and Carolyn return to the carriage house on the estate. Carolyn turns the lights on and Jeb sees the shadow. He rushes over to Carolyn, who again asks him what's wrong. Jeb tells her to stop asking him that question, and the two begin fighting. He orders Carolyn to leave, saying, "I made a mistake, I don't want you." Carolyn thinks maybe they both made a mistake and rushes out crying.

Carolyn returns to Collinwood, much to Elizabeth's surprise. Elizabeth is unable to console Carolyn after learning of the sad news. Later, Carolyn decides to go back to the carriage house to to talk to Jeb. When she arrives, she notices all the lights have been turned off and the door is locked. She hears Jeb's voice from the inside and he asks her to go away. She turns the lights on and sees the shadow, and the two run out of the house.

Willie: That must be some other Willie Loomis!

Professor Stokes: She means a great deal to all of us.

Elizabeth: Elliot has a theory about everything.

Professor Stokes: (that he didn't see the Parallel Time room) I am furious.

Professor Stokes: (to Barnabas) But for all our sakes, don't do anything that might destroy you.

Dark Shadows - Episode 972 on the IMDb 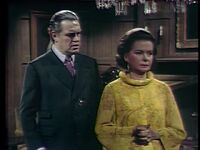 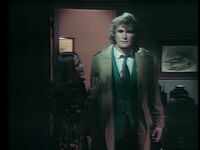 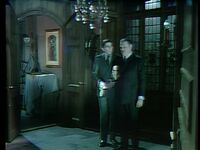 Investigating Parallel Time
Add a photo to this gallery
Retrieved from "https://darkshadows.fandom.com/wiki/972?oldid=142299"
Community content is available under CC-BY-SA unless otherwise noted.