A strange night of mystery on the great estate of Collinwood. For Barnabas Collins searching the long deserted east wing, has made an astonishing and puzzling discovery: a room, brilliantly furnished, but a room which he cannot enter, stopped by some invisible force, and a room in which he saw Julia and Elizabeth, obviously living different lives. They could not hear him when he called to them. Then the door closed, and he managed to open it again, the room was empty, the furnishings gone.

Barnabas is in the drawing room with Julia, continuing to explain what he saw in the East Wing. Julia says she has never been in that part of the house before, but feels that Barnabas is telling the truth. Barnabas believes that the people in that room are all leading different lives than those they already know. The two decide to go upstairs to investigate, but Elizabeth walks in and begins talking about how she wants to re-decorate the carriage house. Barnabas and Julia perpetrate a lie in order to leave and together they head up to the East Wing.

Roger returns to Collinwood and storms into the drawing room to speak with Elizabeth. He is furious to learn that Carolyn and Jeb are now married and he knew nothing about the wedding. Elizabeth admits she wasn't entirely fond of the wedding, but says they are in love and there is nothing they can do. Roger scoffs at her and declares he will do what is necessary to have the marriage annulled.

Barnabas and Julia are in the East Wing and arrive at the room. They open the door and find the room empty and abandoned. Julia is hesitant to enter the room at first, but they both decide to go in together. Barnabas explains to Julia how the furniture was set up and he mentions that the people he saw were wearing modern day clothing. They hear a strange knocking noise, but it turns out to be only the wind blowing up against the window. Julia recalls a conversation she had previously with Professor Stokes about a concept called "Parallel Time." She illustrates the concept by reflecting how different her own life might have turned out, had she not chosen medical school. Soon the two hear another noise, this time coming from the hallway. The two leave the room and find Megan.

Megan begs Barnabas to put down his flash-light. Barnabas and Julia take Megan into the Parallel Time room and ask if she has ever heard voices coming from the room, but she denies knowing anything. Megan tells them that she has forgotten all about her previous life as a human. Julia offers to give Megan the injections that she has been giving Barnabas, but she refuses, saying she enjoys her new life and there is nothing for her to go back to as a human now that Philip is dead. Barnabas begs her to reconsider, but she disappears.

Roger is at the Old House and berates Willie for not knowing where Barnabas and Julia are. As the two are talking, Megan appears in the window, staring at Roger. Willie is startled at Roger's behaviour after he leaves.

Roger is walking back to Collinwood through the woods and Megan appears to him. He apologizes to her for the death of Philip and gives her a hug, and Megan bites him.

Moments later, Roger returns to Collinwood while Barnabas and Julia are talking in the drawing room. Roger tells Barnabas he has been looking for him, but can't remember why. He mentions how the light hurts his eyes and that he just ran into Megan in the woods. Barnabas and Julia both realize he has been bitten. After Roger leaves, Barnabas tells Julia that they will have to destroy Megan with a stake during the day.

At the Old House, Barnabas tells Willie he will have to be the one to destroy Megan, but Willie wants nothing to do with it. He reluctantly agrees after much convincing. Barnabas tells Julia they will talk with Sky the next day on the whereabouts of her coffin. After Julia leaves, Barnabas continues to wonder about the room in the East Wing.

Later at Collinwood, Julia asks Elizabeth about the East Wing. Elizabeth says she hasn't been in the East Wing in about six months, and the only time anyone ever goes there are the servants who clean it every spring. Julia says she thought she saw a light coming from a room there, but then surmises it was probably just lightning reflecting off the window. While they are talking, Barnabas sneaks into the house and quietly goes upstairs.

Barnabas enters the East Wing and opens the door, and again the room is fully furnished and lit up. Elizabeth is in the room and is about to remove a portrait covered by a tarpaulin hanging above the fireplace before Julia walks in and stops her. They argue about the portrait and whether it should be removed or not. Julia says they will let "him" decide and she removes the covering, revealing it to be a portrait of Angelique. Elizabeth doesn't want anyone to see the portrait, and shuts the doors on Barnabas, who is unable to enter.

Julia: We live in this universe in 1970, right? We accept the fact that our time is the only time that we can truly know. Suppose time is like a road, and parallel to it there's another road: on one we live the lives we know, but on the other road our lives are different because we're in a different time band and we've made different choices.

Megan: I don't want to be any different from what I am now....You just don't know, I won't let you change me.

Willie: Why are you picking on me, Barnabas?
Barnabas: I'm not picking on you.
Willie: Oh yes you are! I'm not going up to some old room in the east wing and open up some coffin and put a stake on a heart....Barnabas, I don't even know Megan Todd!

Barnabas: Willie, you're not listening to me.
Willie: That's because you're gonna talk me into it! Not this time.
Barnabas: I do trust you, Willie.
Willie: Yeah, yeah. You do. That's why I'm always getting into trouble.

Dark Shadows - Episode 970 on the IMDb 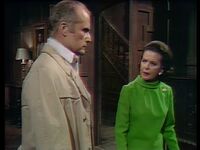 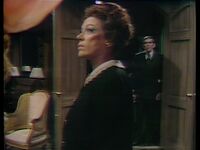 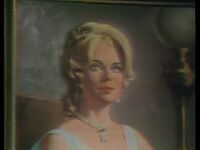