In a room in the closed-off East Wing of Collinwood, Barnabas experiences a strange vision.

Night over Collinwood. A night which should be filled with joy, for there is to be a wedding in the great house. Jeb, having destroyed the Leviathans, and with them his true self, is to marry Carolyn at last. But Jeb knows he has many enemies, and Angelique, determined to avenge her broken marriage has foretold his own death. A death that will come from a seemingly innocent shadow, which will grow and grow until it overwhelms him.

Jeb is looking out the window of the drawing room when Carolyn comes in and kisses him. He asks if she is disappointed and she says all she wants to do is get married. Elizabeth walks in with Reverend Brand and asks if they are ready to begin, as the Reverend has an appointment. As everyone takes their place, Jeb remembers that he has flowers in the foyer and goes to get them. He brings them in and they start the ceremony.

The ceremony concludes and the newly-weds kiss as Elizabeth cries. Champagne is opened for all and Elizabeth asks how long the couple is planning on being gone because she wants to make some changes to the carriage house. Jeb says he doesn't know as he hands out the champagne. Julia wanders by and Jeb invites her to join them. Julia looks surprised, but offers her best wishes to the couple. Elizabeth notes that Julia seems surprised and Jeb adds that there will be many shocked faces on the estate tonight.

At the Old House, Barnabas comes up from the cellar and as he is lighting the candles, he notices Sky is waiting for him. Sky wants to know where Angelique is because he needs her help. Barnabas tells him that Angelique will not help him and that when Jeb destroyed the Leviathan Box he was released from his servitude. Sky tells him his deal was with Mr Strack, not the Leviathans, and then shows him the bite marks Megan put on him.

Back at Collinwood, Elizabeth is clearing the champagne glasses as Carolyn tells Jeb she needs to change clothes, leaving Jeb alone to contemplate how smoothly the wedding went and trying to convince himself that Angelique’s spell was just to scare him. Just then the shadow appears, scaring Jeb out of the room. He yells to Carolyn that they must leave Collinwood immediately.

Barnabas apologizes to Sky for Megan's attack, telling him he tried to find her. Barnabas asks where Megan’s coffin is and Sky says she moved it to the East Wing of Collinwood. Barnabas tells Sky he has a friend who will help and if Megan calls to him he must go to her. Just then Julia arrives and Barnabas tells Sky that if he finds Megan he is to go to Julia, who will tell him what to do. Sky leaves as Julia tells Barnabas about the wedding.

Jeb is distracted as Elizabeth is trying to bid him goodbye and asks what is wrong. Jeb says everything is great and the couple leaves. After they are gone Elizabeth walks slowly away from the door and discovers she forgot to throw the rice. Barnabas and Julia soon arrive and Elizabeth tells them she needs to see what damage was done to the carriage house from the fire and Julia offers to go with her right now. That leaves Barnabas alone to search for Megan's coffin. Barnabas thanks Julia, but she says she was not thinking of the mission, she just felt sorry for Elizabeth. Julia asks if it is possible for Jeb to change to his Leviathan form and Barnabas says that when he destroyed the Leviathan Box he lost all his powers and should have died. Barnabas says that because he saved Carolyn's life they must watch and wait for any sign he is making her unhappy before they act against him.

At a hotel somewhere, Jeb carries Carolyn over the threshold and kisses her before starting to look for the shadow.

Barnabas tells Julia she must offer Megan the injections before Elizabeth arrives with the key to the carriage house. She says Mrs. Johnson was upset that Jeb and Carolyn did not ask her to be at the wedding, but that Jeb was determined to keep it a secret. Elizabeth and Julia leave and Barnabas says he is going to find a book and read.

That night, as Carolyn sleeps, Jeb gets out of bed, turns on a light, and sees the shadow. He turns off the light and wakes Carolyn, telling her he can’t explain, but they must leave immediately.

Barnabas enters the East Wing of Collinwood, searching for Megan's coffin. He opens up a door to a room which is lit up and in use. He tries to enter, but cannot cross through the door. Looking, in he sees a photograph of Quentin with the inscription "Your loving husband, Quentin". Elizabeth walks in wearing different clothes than when he saw her a few minutes ago. He calls to her, but she does not respond. Elizabeth walks to a closet full of clothes and begins to remove them when Julia walks in wearing a maid’s uniform and asking Elizabeth what she is doing. Elizabeth says she is clearing the room because "he" will want it open, but Julia says "he" won't, and that the room is "hers" and will always be "hers." Elizabeth replies that "she" is dead, but Julia says "she" will be back and no one else will ever live there. Elizabeth scurries to the door, not wanting "the children to hear" and closes the door on Barnabas. Barnabas calls through the door, puzzled. Just then, the doors open and inside is an abandoned, empty room.

Barnabas: Angelique asks me nothing and tells me nothing. We are not friends.
Sky: You're much closer than friends; you're enemies. I know that neither of you can resist torturing each other.

Dark Shadows - Episode 969 on the IMDb 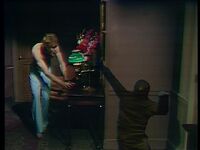 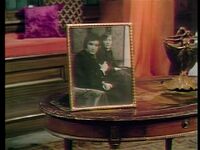 Photograph of Quentin and Daniel 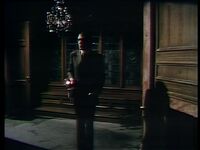 East Wing Mystery
Add a photo to this gallery
Retrieved from "https://darkshadows.fandom.com/wiki/969?oldid=142134"
Community content is available under CC-BY-SA unless otherwise noted.