Angelique puts a dark shadow on Jeb that will follow and destroy him.

This night at Collinwood, Carolyn Stoddard has waited for the man she loves. But instead of a new life with Carolyn as his bride, Jeb Hawkes seemed destined to find death this night, for he has been lured to Widows' Hill by a ghostly enemy, who knows that drowning is the only way to destroy him.

Jeb shows up at Widow's Hill, looking for Carolyn, but finds Philip instead. Philip won't let him leave, and prepares to push him over the edge of the cliff.

Jeb hits Philip with a rock and manages to free himself. He tells Philip he doesn't want to kill him and tells him to leave. After Philip leaves, he soon reappears from the bushes and lunges at Jeb, but Jeb dodges him and Philip falls to his death. Jeb is visibly shaken, not having wanted Philip to die, but then Peter appears. Peter says he doesn't care how many people have to die, and he will only be satisfied when Jeb is finally dead. Jeb hastily leaves and Angelique appears. Angelique informs Peter that she will be the one to kill Jeb, for he ruined her marriage and life with Sky. Peter informs her that Jeb can only be killed by drowning, but Angelique reminds him she is "no ordinary woman" and has other methods of killing him. Angelique sends Peter back to his grave, promising him that he will soon have his revenge.

At Collinwood, Elizabeth has found Carolyn's letter explaining that she has gone away with Jeb. Once she is finished, Carolyn walks in and Elizabeth asks her to reconsider. Carolyn explains that she has no idea where Jeb is. Elizabeth thinks it's because Jeb didn't want to marry her. The phone rings and it's the police, asking for Megan. Philip has escaped from jail and no one has any idea where he is. Jeb appears in Carolyn's room and tells Carolyn to have them look in the water under Widow's Hill.

Jeb takes the phone from Carolyn and speaks to the police. The police feel Philip had a nervous breakdown after hearing Jeb's story. After hanging up, Jeb tells Carolyn he still intends on marrying her, much to her delight. Elizabeth intervenes, saying although she doesn't approve of the marriage, she wants the wedding to be at Collinwood. Jeb is not entirely pleased with the idea, and says he doesn't want anyone to know about it until the ceremony is over.

Later that morning, Angelique visits Elizabeth at Collinwood, and tells her that her and Sky are no longer together. Jeb walks in and Angelique immediately begins eyeing him up. Jeb gets nervous and asks to be excused. Before he leaves, he admits to Angelique that he and Carolyn are going to be married. Angelique coldly wishes him best of luck in his marriage.

Jeb returns to his cottage/carriage house and finds Angelique waiting for him. He asks why she is there, saying she hardly knows anything about him, but Angelique tells him she knows a great deal about him, and wonders how he is still alive now that the Leviathans have been destroyed. She admits she plans on destroying him very soon.

At Collinwood, Elizabeth and Carolyn are preparing for the wedding. Elizabeth has finally agreed to have only a small ceremony at Collinwood. Carolyn thanks Elizabeth for her "support," but she is still sceptical of the marriage.

Meanwhile, Jeb and Angelique are still arguing at the carriage house/cottage. Jeb feels that Sky's greed ruined her marriage, not himself. Angelique gives Jeb a black cut-out in the shape of a man with his arms raised, and says it will soon consume him and destroy him. She beckons Jeb to look into the fire and he sees a vision. In the vision, Jeb is asleep in an unknown location. He wakes up and notices a large shadow image engulfing him and killing him. Angelique tells Jeb the shadow will soon follow him wherever he goes.

That night at Collinwood, the wedding is about to take place. Jeb admires himself while looking in the mirror. In the background, he sees the shadow and starts to panic. Carolyn walks down the stairs and he quickly calms down. As everyone prepares to enter the drawing room, Jeb again sees the shadow.

Jeb: Tell them to look in the water below Widows' Hill.

Angelique: I am no ordinary woman.

Dark Shadows - Episode 968 on the IMDb 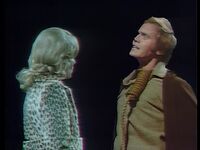 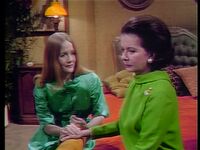 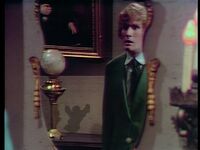