The ghost of Peter Bradford vows revenge on Jeb, who struggles with Philip.

This night at Collinwood, Carolyn Stoddard has stayed firm in her decision to marry Jeb Hawkes. But then she has a terrifying dream. A dream in which she heard Jeb Hawkes confess to the murder of her father, then saw him turn on her and destroy her, too. So deeply as the dream disturbed her, Carolyn knows she must reconsider the decision, or face a lifetime of fear.

After her dream, Carolyn rushes to the carriage house/Jeb's cottage and tells him she can't go through with the wedding. Jeb gets upset and violently grabs her.

The two briefly struggle, but they end up sharing a kiss. Carolyn says it wasn't Barnabas or Elizabeth who made her change her mind, but Paul. Jeb is confused, but Carolyn explains her dream to him. He denies doing anything to Paul and tries to get Carolyn to forget about her dream. They re-affirm their love for each other, but Carolyn says she needs more time. Her decision upsets Jeb, who says she has two hours to pack all of her belongings. She appears to finally agree, and leaves the carriage house/cottage. After she leaves, the mysterious presence who had haunted Jeb previously returns. Jeb calls out the presence, thinking it's Paul, but it reveals itself to be Peter Bradford instead. Peter admits he prevented the deaths of Maggie, Willie, and Julia, and destroyed the Leviathan Book. Peter proclaims he has come to get his revenge on Jeb, who he says is responsible for killing Victoria Winters in 1797. Peter also tells him that he was hanged for trying to kill him in the past as well, and vows he will push him over Widow's Hill just as he did in the past.

Peter threatens to hurt Carolyn, but Jeb vows to protect her. Peter disappears and the lights turn back on. Jeb rushes to the phone and calls Carolyn at Collinwood. He instructs her not to leave Collinwood until he comes for her. Carolyn is confused, but Jeb won't tell her anything over the phone. Jeb tells her he will pick her up at Collinwood in two hours (at 3:30am).

In an unknown location, Megan rises from her coffin as Sky watches over her. Megan tells Sky he is free to do whatever he wants, but Sky only wants to be with her. He tries to kiss her, but she pushes him away and says there is someone she has to visit.

Later, Megan appears in Philip's jail cell. She tries to bite him while he sleeps, but he wakes up and she pulls away. Megan tells Philip she will try to get him out of jail, but Philip thinks it's hopeless. Megan tells him not to worry and bites him.

Jeb is still at his carriage house at 2:30am. As he packs his things, he hears the voice of Peter, saying in one hour he is going to push him over Widow's Hill.

Back at the jail, Philip is wandering around his cell, dazed and in a confused state. Peter appears to him.

Philip asks Peter what he wants with him. Peter tells him they were both in love with women who were killed by Jeb, but Philip says Barnabas is responsible, to which Peter convinces him it wasn't Barnabas' fault. Peter instructs Jeb to do exactly as he says, or else he will just end up back in jail. He unlocks the cell and frees Philip.

Jeb calls Carolyn at 2:50am and tells her he can't wait until 3:30, and is coming to get her now. Before he can leave the carriage house/cottage, he starts to feel weak and collapses in the chair. Peter appears and pushes Jeb's clock back to 2am. Carolyn attempts to call Jeb from Collinwood when it actually is 3:30, but he is still unconscious. She contemplates going to look for him, but she decides to stay at the house. Meanwhile, Jeb finally wakes up, thinking it's 2am. As Jeb leaves the carriage house/cottage, he is caught by Peter. He informs her that Carolyn isn't at Collinwood, but instead is at Widow's Hill.

At Collinwood, the clock strikes 4am and Carolyn still has had no sign of Jeb. She decides to leave the house and take the back path to the carriage house/cottage. Jeb shows up at Collinwood at the same time Carolyn shows up at the carriage house/cottage. Jeb again hears the voice of Peter, telling him that Carolyn is at Widow's Hill. Jeb finally gives in and rushes to the cliff, only to find Philip waiting for him instead. Philip says he is finally going to get his revenge for all of the trouble Jeb has caused him during his time in Collinsport. The two begin to fight and Philip prepares to push him over the edge.

Jeb: Your daughter loves me, Stoddard!
Peter: As much as Victoria Winters loved me?

Dark Shadows - Episode 967 on the IMDb

Dark Shadows Every Day - Episode 967 - Vicki Ruins Everything, part 3: The Way It Happened 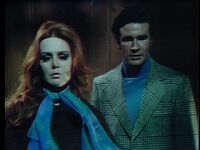 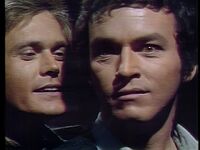 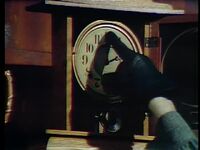 Turn Back Time
Community content is available under CC-BY-SA unless otherwise noted.
Advertisement