In a dream, Barnabas informs Carolyn that her father was murdered by Jeb.

On this night, one evil man will visit upon the Collins estate. A kind of terror never known before. He has placed Carolyn Stoddard in a deep trance, and has chosen her to take part in a strange and terrible ceremony. A ceremony which could end in her destruction.

Jeb places the Leviathan box on the altar and takes his place beside Carolyn. As Nicholas conducts a ceremony, Jeb calls out to Barnabas and destroys the box. The Leviathan Altar is destroyed and Jeb collapses in pain.

Nicholas is furious with Jeb now that Leviathans have been destroyed. Jeb regains his strength, but Nicholas warns him he will only survive for a short amount of time.

At the carriage house, Bruno notices the Chosen Room has caught on fire, and the zombies have all turned into skeletons. Panicking, Bruno rushes out of the house and searches for Nicholas.

Barnabas returns to Collinwood with Carolyn. Elizabeth sees them and they both take Carolyn up to her room. Barnabas agrees to tell Elizabeth everything that has happened.

In the woods, Bruno is observing one of the zombies (now a skeleton) and Nicholas approaches him. Nicholas tells him "everything is over." The two walk back to the carriage house.

Barnabas and Elizabeth are talking in Carolyn's room while she sleeps. Elizabeth has no idea what Barnabas is talking about when he mentions the Leviathans. Barnabas concludes that everyone has been released from the Leviathans' power. Carolyn begins to awaken and calls for Jeb. Meanwhile, Jeb is standing outside of Collinwood, thinking to himself that Carolyn is the only one who can save him.

Carolyn wakes up and has trouble remembering what has happened to her. She only remembers being at the carriage house and Nicholas was with her. Barnabas reveals to Carolyn that Nicholas hypnotized her, and tells the Stoddards he has to do more investigating. After he leaves, Carolyn goes to phone the carriage house.

Jeb enters the foyer at Collinwood and is nearly caught by Barnabas, who is walking out of the house. He sneaks upstairs and knocks on the door. Elizabeth answers the door and is upset with the fact Jeb let himself in. Jeb notices her different behaviour and also realizes she has been released from the Leviathans' control. Elizabeth agrees to let Carolyn and Jeb talk, and leaves the room. Jeb asks Carolyn to marry him and leave Collinsport forever with him, but Carolyn is hesitant since Jeb doesn't want to stay at Collinwood. She agrees to marry him and leave town.

Nicholas and Bruno are at the carriage house, discussing what to do next. Nicholas wonders why Jeb isn't dead yet, since he can no longer change into his true form, but promises to Bruno that Jeb will be dead very soon.

At Collinwood, Carolyn is putting the finishing touches on a letter to Elizabeth in which she explains that Jeb has asked her to marry him and they are leaving Collinsport. She then goes to her bed to lay down, and she begins to dream. In her dream, Jeb and Carolyn are about to be married in the Collinwood drawing room. As they enter the room, Carolyn sees Nicholas, and Jeb tells her he is going to perform the ceremony. Carolyn is frightened by Nicholas, but Jeb is able to calm her down. She says the wedding can't start yet because her parents aren't there. Jeb informs her that Elizabeth didn't approve of the marriage and Paul is dead. Nicholas begins to perform the same ceremony he did at the Leviathan Altar. Carolyn begins to panic. The lights then go out and Barnabas enters the room. He tells Jeb he can't marry her until he admits he killed Paul. Jeb admits it, and then begins to strangle her.

Carolyn wakes up and grabs her coat. She rushes to the carriage house and informs Jeb she can't go through with the wedding. Jeb becomes furious and grabs Carolyn, just as he did in her dream, and begins to strangle her.

Bruno: All our dead have turned into skeletons!

Dark Shadows - Episode 966 on the IMDb 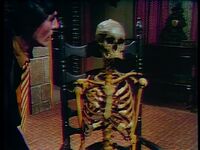 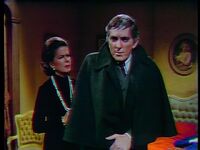 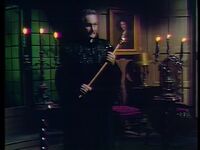 Master of Ceremonies
Community content is available under CC-BY-SA unless otherwise noted.