Nicholas declares that Jeb and Carolyn must be married in a strange ceremony.

It has been a night of terror on the Collinwood estate. A young man named Jeb Hawkes has decreed that each of his enemies must be destroyed. And for Quentin Collins, he has planned a cruel and hideous act.

Jeb and the zombies bury Quentin alive in the graveyard.

The zombies finish burying Quentin, and Jeb says goodbye to the freshly dug grave, calling him an "old man." Quentin regains consciousness and realizes he has been buried alive.

Nicholas arrives at the carriage house and hears Julia in the Chosen Room, who is working on blood samples. Julia refuses to give Nicholas information as to why she is there, but finally talks when Nicholas threatens to kill her. Nicholas mocks Julia and Jeb for thinking there is a way out of Jeb's Leviathan curse and smashes Julia's equipment.

Maggie returns to the Old House, frantic with fear that something has happened to Quentin. Barnabas tries to reason with her, but she is determined that Quentin is in great danger, and that she is the only one who can save him. She notices the pitchfork symbol has again appeared on her hand, and she rushes out of the house, with Barnabas close behind.

Julia ponders what Nicholas is going to do with her. Surprisingly, Nicholas offers to let her leave on one condition: Julia and Barnabas must stay away from the Leviathans and their plans. Julia is about to leave, but Jeb shows up and stops her. Nicholas again reminds Jeb that he is the one who gives the orders, and forces Jeb to let her go. Jeb proclaims he is going to destroy the Leviathan creature, but Nicholas warns him that the creature is all he is. Nicholas tells him the ceremony must happen tonight. Jeb wants no part of it, but Nicholas warns him Carolyn must also convert to the other form and it must happen soon. Jeb is furious with the idea, but he finally agrees.

Maggie and Barnabas arrive at the graveyard and notice a fresh grave. Maggie claims she can sense Quentin's presence, and convinces Barnabas he is buried there. Barnabas begins to dig up the grave.

Jeb and Carolyn are sitting by the fire at the carriage house. Jeb tells Carolyn he loves her very much, but there is another side of him that she doesn't know about. Carolyn is confused, but says she doesn't care and just wants to be with him.

Back at the graveyard, Barnabas has finished digging up the coffin, and they release Quentin, who is short of breath but otherwise unharmed. They head back to the Old House so Julia can look him over.

At the carriage house, Carolyn tries to ask what is bothering Jeb, but he doesn't want to tell her. He says he has to go to something important, and he'll be back soon. Carolyn agrees to wait for him.

Barnabas and Maggie return to the Old House with Quentin. The two take him upstairs while Julia waits in the drawing room. She hears the front door open and Jeb rushes in.

Jeb begs Julia to help cure him tonight, because something is going to happen, but he won't reveal what it is. Julia calls him out on what he did to Quentin earlier in the night, but Jeb says he doesn't care any more and he is a changed man. After much arguing, Julia refuses to help him, putting him in a panic. He turns around and notices Barnabas staring at him.

Nicholas returns to the carriage house and notices Carolyn is by herself. He hypnotizes her. When she is in a trance, Nicholas orders the zombies to take her to the Leviathan Altar.

Back at the Old House, Maggie is looking for Barnabas, but he isn't there. Quentin appears and shows Maggie his pitchfork symbol on his hand, realizing that is how she knew he was in danger. The two embrace.

Nicholas (to Julia): Now, come, come, Doctor, speak up. I've never known you to be at a loss for words.

Nicholas: Your childish pranks are beginning to bore me.
Jeb: They’re not pranks! I happen to enjoy the way that I am now, and I am going to destroy that thing that’s me in that room!

Maggie: Why is this happening to us?
Quentin: I don't know, but I don't have any desire to fight it.

Dark Shadows - Episode 965 on the IMDb 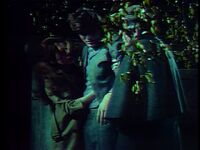 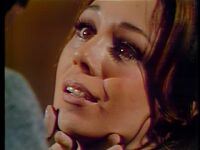 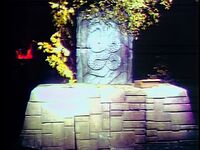