Megan, as a vampire, attacks her first victim, and Quentin is buried alive.

Horror stalks the halls of the great house of Collinwood. For Jeb has vowed to kill Barnabas Collins and all those helping him. Now, dead men, servants of Jeb Hawkes, carry out his mission of revenge. And already they have found their first victim.

The zombies carry an unconscious Julia down the stairs. Roger shows up and is also knocked unconscious by one of the zombies, but they leave his body in the foyer and leave the house.

Julia regains consciousness and finds herself in the carriage house/Jeb's cottage. She tries to escape, but the zombies are guarding the perimeter of the house. Sky appears and assures Julia that she has not been harmed. Julia demands to know why she has been brought to the carriage house/Jeb's cottage. Sky only says that Jeb wants to talk to her, but she will have to wait for him to return.

Meanwhile, Quentin shows up at Collinwood and finds Roger, still on the floor. He wakes up and frightenedly exclaims that "dead men" have taken Julia.

Back at the carriage house, Julia tells Sky she will never reveal where Barnabas' coffin is. Before she can ask more questions, she hears the sound of breathing coming from the Chosen Room and becomes frightened. Sky tells her she must enter the room. Julia refuses and tries to escape, but is stopped by the zombies. Sky forces her into the Chosen Room and she sees Jeb in his true form.

Julia begs the Leviathan creature not to harm her, but he turns suddenly turns back into Jeb. Jeb tells her she must follows his orders, or next time she won't be so lucky.

At Collinwood, Quentin and Roger are trying to figure out where Julia might be. They both decide not to go to the carriage house, thinking it might be too obvious, and aren't sure about the cemetery either.

At the carriage house, Jeb instructs Sky to go to Collinwood to see if Megan has returned. Jeb tells Julia that Megan is missing, but Julia pretends to not know anything. Julia finally confronts him as to why she has been brought to his house, and Jeb tells her he knows about her treatments for Barnabas. He goes onto say that if she is going to help Barnabas, then she is going to cure him, too. In a rare show of emotion, Jeb says he hates having to turn into the creature, and only wants to be human like everyone else. At first Julia says she can't help him, but Jeb wants her to try. Julia tells him she will only try to help him if he leaves Barnabas alone, to which he agrees.

Roger and Quentin are still arguing about a plan of action. Quentin wants to go to the cemetery, but Roger thinks it's a suicide mission. Suddenly, there is a knock on the front door. It's Sky, who has apparently come to see Elizabeth. Quentin tells him that Elizabeth will be down soon, and in the meantime they can "have a little chat." Quentin motions to Roger that he will handle the conversation, and the three men head into the drawing room. Quentin grabs a sword from the wall and points it at Sky's chest, demanding to know where Julia is.

Sky claims to not know where Julia is, but Quentin doesn't believe him. After he again threatens to kill him, Sky finally admits she is at the carriage house, and gives Quentin a password to get past the zombies. Quentin quickly leaves and Roger stands guard. As Roger watches over him, he sees Megan looking in through the window, baring her fangs. Sky uses the opportunity to escape the drawing room, and he locks Roger in.

Sky meets Megan outside of Collinwood. He warns her to stay away from Roger and tells her that Jeb is upset with her for some reason. Megan says she doesn't care about Jeb or the Collins family any more, and bites Sky.

Jeb is sitting in the carriage house when Quentin barges in and the two begin fighting. The zombies enter and knock Quentin out. They take him into the Chosen Room and put him in a coffin. The zombies take the coffin with Quentin inside and bury him in the graveyard.

Sky: Good evening, Dr. Hoffman. How nice to see you again! Of course, you don’t think so.
Julia: No, I do not. Why have I been brought here?
Sky: Now, now, doctor. No questions! You are here, and fine. Just enjoy it.
Julia: That’s impossible, Mr. Rumson.
Sky: What an impatient woman you are! Always so eager to get to the bottom of things.
Julia: Those men -- those men that brought me here are dead!

Dark Shadows - Episode 964 on the IMDb 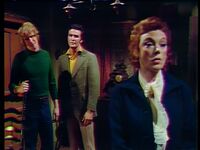 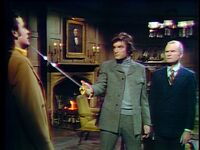 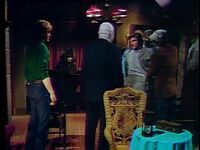