A stormy night at Collinwood. A night for revenge. And one twisted and enraged young man is determined to silence the enemies who are against him. And so unable to trust one living human being, he is forced to call upon the dead to help him with his plan.

In the cemetery, Jeb performs a ceremony over four graves of men who have recently died. They rise from the dead and are ready to serve him.

The four men rise from their graves and Jeb states that he is their leader. He tells them they must kill 5 people by the next morning: Barnabas, Julia, Quentin, Roger, and Willie.

Barnabas and Julia are at the Old House and Barnabas seems tense. He wonders why Jeb has been rather quiet lately, ever since Nicholas returned. Barnabas tells Julia he had "a long talk" with Megan and feels they can use her in their battle against the Leviathans. As Jeb and the zombies show up and watch through the window, Julia prepares an injection for Barnabas, but he feels they aren't working.

At Collinwood, Megan is staring at the window as nightfall approaches. She wonders why Barnabas hasn't called for her yet. There is a knock on the front door: it's Jeb and Elizabeth answers. Jeb asks if Megan is in the drawing room; Elizabeth replies that she is. Jeb instructs her to keep an eye on Megan and not let her leave the house, and if Barnabas shows up for whatever reason, make sure she isn't alone with him. Jeb leaves, and Elizabeth walks into the drawing room. Megan is very ill and reacts negatively to the light, but tries to pass it off due to lack of sleep and because she is upset that Philip is still in jail.

Barnabas is walking around the drawing room at the Old House, and strongly feels the need for blood. He calls for Megan, but tries to resist the temptation. At Collinwood, Megan asks Elizabeth for water. While she is gone, she gets up from the chair and leaves the house. Barnabas, knowing that biting Megan would be a critical mistake, decides to go to Collinsport. He opens the front door and Megan is waiting for him.

Barnabas tries to get Megan to leave, but she refuses. At Collinwood, Elizabeth is frantically searching for Megan when Julia walks in. Elizabeth tells her that Megan is missing, and that she is very sick. When Elizabeth mentions that the light was hurting Megan, Julia quickly leaves and rushes to the Old House. At the Old House, Barnabas gives in and bites Megan again and she collapses as Julia walks in. Julia examines her and pronounces her dead. Barnabas reminds Julia that Megan will rise as a vampire if they do not drive a stake through her heart. Barnabas and Julia leave to go make a stake.

At Collinwood, the zombies are guarding the front door. Inside, Jeb scolds Elizabeth for letting Megan out of her sight. He orders her up to her room and he turns the lights off.

Barnabas and Julia finish crafting a stake and and prepare to destroy Megan. They walk into the drawing room, but her body is missing.

Outside of Collinwood, Jeb gives orders to the zombies and lets them into the house. Julia returns to the house and goes upstairs into her room. As she works on blood samples, she hears strange noises coming from the hallway. She opens the door and is attacked and kidnapped by the zombies.

Barnabas: Megan and I have had a long talk.
Julia: What else have you had, Barnabas?

Jeb (thinking, looking through the Old House window and seeing Julia give Barnabas his injection): How stupid of me not to have guessed the truth. Dr. Hoffman...a doctor with a very bizarre practice.

Dark Shadows - Episode 963 on the IMDb 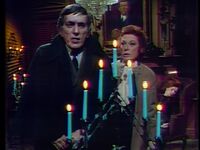 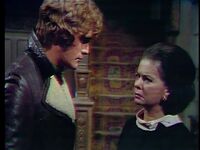 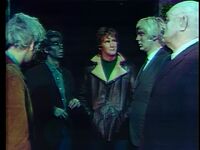 Army of the Dead
Community content is available under CC-BY-SA unless otherwise noted.
Advertisement