Although the inhabitants of the great house of Collinwood do not know it, there is a lethal struggle going on in the cemetery. A struggle whose outcome concerns them all. For Bruno's jealousy of Jeb has led him to use the captured werewolf for his own ambitions. Though Jeb does not know it, Bruno has replaced the silver bullets in Jeb's pistol with ordinary ones. And by so doing, turning the animal into a weapon of death.

Bruno locks Jeb in the crypt with the werewolf. When the bullets have no effect, the werewolf lunges at Jeb.

Jeb begs Bruno to let him out, but Bruno doesn't answer. The werewolf attacks Jeb, but Jeb uses the silver handle of a whip to fight off the werewolf.

Quentin arrives at Collinwood and sees Carolyn. Carolyn notices that Quentin, Barnabas, and Julia all hate Jeb, and Carolyn questions Quentin about it. Quentin is evasive, but Carolyn reaffirms that her love for Jeb will never change.

Bruno returns to the carriage house to find Megan sitting by the fire. Megan asks Bruno about his obvious good humour despite the full moon. Bruno tells Megan that Barnabas is a vampire (unaware that Megan is Barnabas's minion) and asks for Megan's help in destroying Barnabas. Megan declines.

Quentin finds the werewolf severely injured while walking through the woods. Quentin feels pity for the werewolf and offers help, but the werewolf collapses. At sunrise, Chris reappears.

Later that morning, Jeb returns to the carriage house, surprising Bruno, having escaped the crypt. Jeb tells Bruno he will not be so lucky.

Bruno denies taking the silver bullets out of the gun. Bruno convinces Jeb to spare his life by revealing that Megan has bite marks on her neck, and Barnabas is using her to infiltrate the Leviathans. Jeb vows to investigate, and the two go to Megan's room at Collinwood, where they find Megan calling to Barnabas in her sleep. Jeb admits he made a mistake by turning Barnabas back into a vampire. He decides upon a plan, but determines not tell Bruno about it just yet.

Jeb orders Bruno to keep Megan at Collinwood that night. Bruno wants to leave with Jeb, but Jeb tells him he still doesn't trust him for what happened in the crypt.

In the woods, Chris asks Quentin to kill him so he doesn't have to live with the curse of the werewolf any longer, but Quentin refuses. Chris tries to remember what happened to him, but can only recall being in the crypt with Davenport. Quentin tells him to go back to his cottage and clean himself up.

That night, Carolyn visits Paul's grave, and becomes distraught over the fact that Paul's body was never found. Jeb comforts Carolyn, who confides in Jeb about her argument with Quentin earlier in the day, in which Quentin said Carolyn and Jeb shouldn't be seeing each other. Jeb tells Carolyn not to worry, and walks her back to Collinwood.

Meanwhile, as a storm gathers force, Bruno prevents Megan from leaving her room, and during an altercation, Bruno tears Megan's scarf from her neck, exposing the wound made by the vampire.

Quentin and Chris investigate the crypt where Chris was held the previous night. Quentin informs him no one other than Davenport (who has been shredded to pieces) has died.

As the thunderstorm rages, Jeb visits the cemetery and performs a ceremony over the graves of four men who have recently died, and their corpses rise, ready to serve Jeb.

Carolyn: Why are there so many ways of losing people and so few of holding on?

Chris: The dead sheriff was standing over me with a gun, and I woke up here.

Jeb (at the gravestones of the four men): Thomas Findley--will you join me, Thomas Findley? John Hart--how would you like to see the lightning and hear the thunder? Amos Ross--wouldn't you like to break out of the bonds of earth that hold you? And Emory Pace--at rest, unable to think, unable to dream. Now, all of you in your graves! Will you follow me if you had the chance?

Dark Shadows - Episode 962 on the IMDb 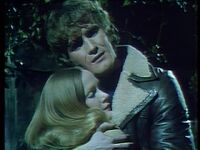 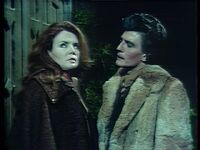 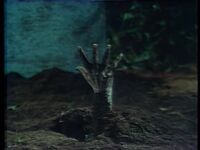 The Undead
Community content is available under CC-BY-SA unless otherwise noted.
Advertisement