Bruno learns Megan has been bitten and tells Jeb to kill the werewolf.

This night at Collinwood, there are those who will live in mortal fear until dawn. A full moon has risen, and they believe a werewolf will prowl the woods in search of a victim. But only two living persons know that for the past 24 hours Chris Jennings has been held prisoner in an abandoned crypt in the old Eagle Hill Cemetery. And now that the moon has risen, the transformation from man to beast has taken place, and Chris Jennings' double life may soon come to an end.

Chris completes the transformation into the werewolf. Davenport picks up his gun and prepares to shoot him.

Bruno shows up and stops Davenport from killing him. Bruno tells him his plans have changed, then mocks the werewolf for being right. He announces he has new plans for the werewolf.

At the Old House, Barnabas gazes out the window and summons Megan.

Meanwhile, Megan is at the carriage house (Jeb's cottage). Megan asks Jeb why he isn't with Carolyn. Her mood suddenly changes once she hears Barnabas' voice, and wants to leave, saying she has something important to do at Collinwood. Jeb is confused, but he lets her leave anyway.

At the crypt, Bruno torments the werewolf with silver. He orders Davenport to leave, and begins to whip the werewolf. Bruno tells him his orders are to kill Jeb.

Megan arrives at the Old House. Barnabas asks her if she knows of Chris' whereabouts. Megan tells him that Jeb doesn't know where he is, but Bruno hasn't been around much the past 24 hours. Barnabas orders Megan to go back to the carriage house to find out where Bruno is, but Megan doesn't want to. She removes the scarf around her neck and only says she wants to be at the Old House. Barnabas gives in to his urge and bites her.

Bruno has knocked the werewolf unconscious and orders Davenport to remove his chains. Davenport is skeptical, but Bruno lies and says it is what Jeb wants. Bruno goes outside and locks Davenport in. The werewolf rises and attacks Davenport.

Bruno returns to the carriage house and tells him there is no sign of the werewolf. Jeb realizes that he hasn't heard the werewolf howling tonight, and thinks perhaps the werewolf isn't in the woods tonight. He leaves and goes to Collinwood to see Carolyn, and orders Bruno to stay on guard. Megan returns, in a daze and noticeably staggering. Bruno notices she seems very pale, and she faints. While he inspects her, he notices the bite marks on her neck. He decides to keep it a secret from Jeb. With Megan passed out, he retrieves his gun and replaces the silver bullets with regular bullets, and plans to let the werewolf rip Jeb to pieces.

Megan finally wakes up and attempts to convince Bruno that nothing is wrong with her. She begs him not to say anything to Jeb. Bruno says he won't say anything, but that she must go back to Collinwood and rest up. Once Megan leaves, Bruno gets the phone and calls Carolyn. He asks for Jeb and tells him that he has captured the werewolf. Jeb agrees to meet him at the crypt.

Megan returns to the Old House and tells Barnabas that Bruno said he doesn't know where the werewolf might be. Barnabas thinks something bad has happened to Chris.

Bruno meets Jeb outside the crypt. Jeb orders Bruno inside to kill the werewolf, but Bruno says Jeb should be the one to do it, since he is the leader and Bruno is merely the follower. Jeb goes inside and Bruno locks him in. When the bullets have no effect on the werewolf, the werewolf lunges at Jeb.

Bruno (to the werewolf): My, my, Mr. Jennings, how you've changed!

Bruno (to the werewolf): I want you mad...mad enough to rip a man to shreds!

Dark Shadows - Episode 961 on the IMDb 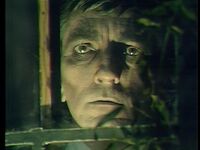 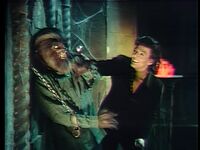 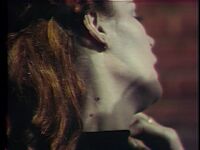