Bruno decides to use the werewolf in an attempt to defeat Jeb.

A silent terror surrounds the great house at Collinwood. Chris Jennings had encountered that terror in a strange and sinister young man he's never seen before, a young man who may know Chris' terrible secret. Now at gunpoint, Chris has been taken to an abandoned crypt in the old Eagle Hill Cemetery.

At gunpoint, Bruno forces Chris into the same crypt that Maggie was previously kept in. Bruno refuses to reveal his identity to Chris, but tells him he is very suspicious about him, and he will find out if his suspicions are correct when the full moon rises.

Chris denies that anything happens to him when the full moon rises. Bruno tells him he will kill him if he turns into the werewolf, otherwise he will be set free. Since Chris will be kept in the crypt for the next 24 hours, Bruno tells him he will have a cell-mate: Sheriff Davenport. Chris is frightened and shocked to see Davenport, but Bruno tells him the Leviathans have the power to bring people back from the dead. Bruno orders Davenport to chain Chris to the wall, and then gives him a gun with six silver bullets in it. If Chris turns into the werewolf, Davenport must kill him.

Jeb is at his cottage, anxiously awaiting for Bruno to return with news on the mysterious presence haunting Collinwood. Once he returns, Bruno tells him he was nearly killed when an old noose appeared around his neck. Jeb asks if Bruno has the noose, but when Bruno goes to retrieve it, it is missing from his bag. Jeb thinks Paul is the one who is fighting the Leviathans from the grave. Bruno suggests asking Nicholas for help, but Jeb wants nothing to do with him. Jeb, becoming increasingly paranoid, feels that Bruno is mocking him for being afraid, and reminds him he must follow his orders.

Jeb and Bruno engage in a fight. Jeb gets the upper hand, and tells Bruno he must remember who the leader is, or else he'll be dead sooner rather than later. Following the fight, Bruno decides not to tell Jeb he has Chris locked up in the crypt with Davenport. Jeb tells him tomorrow morning he will go visit David in hopes that he remembers something from the Leviathan Book so he can deal with the presence at Collinwood. After he leaves, Bruno contemplates to himself whether or not he should "deal with Jeb."

Davenport is still holding Chris at gunpoint at the crypt. As dusk approaches, Davenport forces Chris to chain himself to the wall.

Jeb returns to Collinwood, and Roger scolds him for entering without knocking and for spending too much time with David. Roger feels that David hasn't been himself lately, and forbids Jeb to see him. Jeb isn't intimidated by Roger, and goes up to David's room anyway. Roger goes to the phone and calls Quentin and tells him he will do whatever he can do drive Jeb out of Collinwood. Roger hangs up and notices Jeb has been eavesdropping the whole time.

Roger doesn't seem to care that Jeb heard his entire phone call with Quentin. Jeb admits that Roger knows more about the Leviathans than he thought he did. He tells Roger for his own safety he should stay out of the Leviathans' business. Jeb leaves, and Roger goes to the phone to call Quentin again.

Bruno is pacing around Jeb's cottage, still upset about his argument with Jeb earlier. Bruno decides he is not a follower, but a leader. He gazes out the window, noticing the darkness falling over the estate, and proclaims to himself that Jeb will be dead soon. Jeb returns and tells Bruno he has put Roger in his place. Bruno doesn't seem interested and wants to leave, but Jeb makes him stay.

At the crypt, Chris is starting to feel the pain from the transformation and begs Davenport to let him go. Chris begins to turn into the werewolf and Davenport raises the gun.

Bruno: Does the thought of a full moon frighten you, Mr. Jennings?

Bruno: Mr. Jennings, you look so pathetic, I could almost hope I'm wrong.

Dark Shadows - Episode 960 on the IMDb 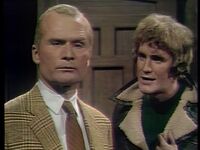 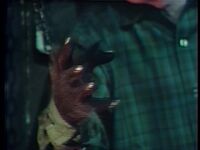 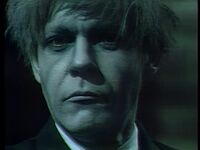 Zombie Davenport
Add a photo to this gallery
Retrieved from "https://darkshadows.fandom.com/wiki/960?oldid=143502"
Community content is available under CC-BY-SA unless otherwise noted.