Bruno learns the identity of the werewolf.

During the past several nights, the spirit of one long dead has made its presence known to a few people within Collinwood. Now, as the great house is engulfed by a raging storm, this strange, alien spirit is about to give another mysterious warning to young David Collins.

David is alone in his room at night and senses the strange presence has returned. The door bursts open and he sees the apparition of a hanged man.

David shuts the door, but can still hear the sound of the hanging man. Moments later, the door opens and Bruno walks in. Bruno tells David that Jeb sent him to protect him, and Jeb couldn't do it himself because he had to go see someone after he learned the Leviathan Book was destroyed. David informs Bruno of what has been happening with the strange presence trying to fight against the Leviathans. Bruno concludes it is the spirit of someone they have killed in the past.

Downstairs, Carolyn tells Sabrina that she has arranged for her to have a makeover. Sabrina is reluctant and fears it might have a negative impact on Chris. She goes on to mention that she feels there is something bothering Chris. Bruno, who has walked down the stairs from David's room, has been eavesdropping and enters the drawing room. Bruno perpetuates a lie to Carolyn where he says he wants a book on the history of the Collins family, and gets her to leave. Once he is alone with Sabrina, Bruno informs her there will be a full moon tomorrow night, which greatly worries her. Carolyn returns with history book, which she gives to Bruno and he leaves the room. Sabrina tells Carolyn that Bruno frightens her and she doesn't trust him.

Bruno returns upstairs and is unsuccessful in trying to find out who the unknown presence might be. The lights go out and he is choked by the presence.

A noose appears around Bruno's neck and chokes him for a few moments, but the lights turn back on and the choking stops. Bruno decides it isn't safe for David to stay in his room tonight and arranges to have him moved.

Carolyn and Sabrina return to Collinwood following Sabrina's makeover. Sabrina has a new outfit and her hair has been restored to its natural brunette color. Bruno comes downstairs and asks Carolyn for help with David.

Upstairs, David explains to Carolyn that he wants to be moved for the night, but doesn't fully explain why. Carolyn agrees to move him to another part of the house.

Sabrina is in the drawing room by herself when there is a knock on the front door. Chris arrives, and is positively surprised with Sabrina's change of appearance. However, Chris is already preoccupied with the impending full moon and the tragedy that will likely come with it. Sabrina asks him not to worry about it, and wants the night to be special between the two of them. The two share a deep kiss while Bruno watches from a distance.

Sabrina asks Chris to go to his cottage with her, and the two leave as Bruno manages to escape from being seen. Carolyn returns and notices Sabrina and Chris have already left. Bruno tells her they seemed very anxious to be alone, which makes Carolyn happy that Chris approved of Sabrina's makeover. Bruno starts asking questions about the two and learns that they were once engaged and then an incident happened, and ever since then Chris will randomly disappear for a few days every month. Bruno starts getting curious and tells Carolyn he has business to tend to, and abruptly leaves.

At Chris' cottage, Sabrina tells Chris she is still madly in love with him and wants to marry him as they were supposed to be a long time ago. Chris is hesitant of the whole idea and says he can't be with her as long as he is still under the werewolf curse. Sabrina understands, and says she won't give up on trying to find a cure for him. The two then leave the cottage, and Bruno appears and sneaks in. While searching inside, he finds chains, handcuffs, and a gun inside a dresser. Bruno hears Chris coming back and quickly hides, but leaves his flashlight on top of the dresser. Chris re-enters the cottage and notices the flashlight, as well as the chains on top of the dresser which Bruno left. Bruno appears and holds Chris at gunpoint. Bruno tells Chris he knows a great deal about him, and tomorrow night they are going to watch the full moon rise.

Bruno (to Chris): Together, you and I are going to watch the full moon rise.

Chris (to Sabrina): Time has passed, and tragedy has been our specialty.

Bruno: Is everything all right with David?
Carolyn: I don't think anything really was wrong. He's one of the world's expert attention-getters.

Dark Shadows - Episode 959 on the IMDb 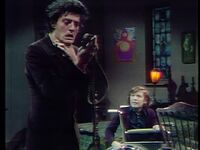 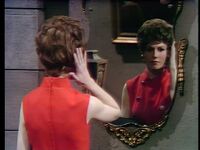 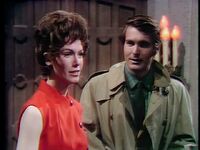 Sabrina & Chris
Add a photo to this gallery
Retrieved from "https://darkshadows.fandom.com/wiki/959?oldid=141742"
Community content is available under CC-BY-SA unless otherwise noted.