Roger learns of the imminent danger posed by the Leviathans.

In his fury at Barnabas Collins, Jeb Hawkes has lashed out at all who are close to him. Maggie Evans, revealed as a traitor, was marked for murder in the tower room, until something unseen terrified Jeb and drove him away. Julia Hoffman has seen Jeb filled with terror, and now she sees the thing that has frightened him.

After Jeb runs off, Julia sees a ghostly caped figure in the corridor outside the tower room, but it disappears seconds later.

That morning, Julia reports to Quentin on the events in the tower room. Elizabeth walks in on them and lies about Maggie's whereabouts (Elizabeth claims she left town on a family matter), and quickly leaves. Julia tells Quentin that they will just have to smile and lie to keep the Leviathans at bay. Julia momentarily leaves the drawing room and crosses paths with Roger, who has just learned that Maggie left town. He enters the drawing room and sees Quentin, which frightens him greatly. Quentin claims to merely be a descendant of the Quentin Collins who lived at Collinwood in 1897, which appears to satisfy Roger. Roger begins to speak about the 1897 Quentin while Amy eavesdrops outside the room, and Roger explains since the incident ended he has been interested in doing more research on him. Quentin claims that the 1897 Quentin only lived with his great-grandmother for a short time before leaving Collinwood forever. Quentin says he feels guilty for the transgressions against Amy and David. As the conversation continues, Quentin's music begins to play, making Quentin feel uneasy. Amy walks in and asks Quentin if he likes the music.

Roger scolds Amy for her behavior. Quentin worries that Amy knows he is the same Quentin who tormented Collinwood a year earlier, which Julia feels is impossible.

Upstairs, Amy tells David of her experience with Quentin, who she feels is the original, but David doesn't appear to be interested in anything regarding Quentin. David tells Amy that something frightening is after Jeb, and therefore Jeb needs their help. David and Amy decide to read the Leviathan Book for further instructions.

In the drawing room, Elizabeth speaks with Jeb by telephone about converting Roger into a Leviathan. Roger storms in and Elizabeth abruptly hangs up. He tells Elizabeth he is not entirely thrilled about Jeb and Megan living at Collinwood, but Elizabeth insists they have nowhere else to go. Roger claims something suspicious is happening at Collinwood, and he will soon find out what it is.

In David's room, David and Amy are reading about how to get rid of spirits who threaten the Leviathans. The lights go out and the two sense a presence is in the room. After numerous failed attempts to read the book, it catches fire.

David and Amy ponder what to do next, now that the Leviathan Book has been destroyed. They decide to ask Elizabeth for help.

Roger shows up at the Old House, looking for Barnabas. Quentin invites him to stay and Roger admits he feels that something strange is going on at Collinwood. Quentin decides to tell him everything that has happened while he has been away.

Back at Collinwood, Elizabeth and David can’t reach Jeb to tell him about the book’s destruction. David orders her to go to his cottage to inform him.

At the Old House, Quentin finishes telling Roger of the Leviathans' plot against the Collins family. He agrees to help Barnabas, but is incredibly worried about his son's fate.

David returns to his room and senses that the mysterious presence has returned. His door bursts open and a hanging figure appears in the hallway.

Julia: This is a house of lies. The only way to bring these people back to the truth is to smile and lie just as they do.
Quentin: You're quite right, Julia. And I've had a few years practice in the art of deception, so I ought to be pretty good.

Roger: He was quite an unusual man, Quentin Collins, and no question about it.

Roger: Everything seems strange to me. Events... people... my own sister seems a stranger. My own son lies and disobeys me. Everything is small, and yet it all adds up to something enormous. To some enormous horror that I can't understand. And I must understand it, I must!

Roger: If you lose your fight, I lose my son. Horribly.

Roger (regarding Jeb): And I have a feeling that my niece deserves something better than an itinerant nobody who can snap a shutter once in a while.

Dark Shadows - Episode 958 on the IMDb

Dark Shadows Every Day - Episode 958 - The Not Normal 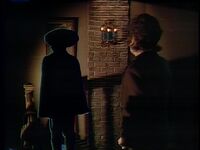 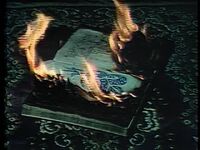 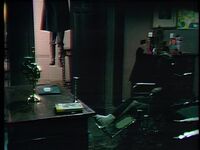 Hanged Man
Add a photo to this gallery
Retrieved from "https://darkshadows.fandom.com/wiki/958?oldid=142310"
Community content is available under CC-BY-SA unless otherwise noted.