Something frightens Jeb at the tower room.

For one woman and one man, this is a night of terror at the great estate of Collinwood. For Maggie Evans has been discovered. Jeb knows she is working with Barnabas Collins against him, and a newly-returned Willie Loomis is trapped with her while trying to save her. As they wait in the tower they hear a sound. A sound which terrifies them both.

Willie and Maggie are trapped in the tower room as they hear the Leviathan creature breathing outside the door.

The breathing suddenly stops and the creature turns back into Jeb. He screams at something and runs away. The key unlocks by itself and the door mysteriously opens. Maggie is skeptical, but Willie uses the opportunity as a chance to escape.

At the Old House, Julia gives Barnabas another injection in hopes of curing his vampirism. Barnabas fears the injections are not working, but Julia wants to continue a while longer. He tells Julia he doesn't think it's a good idea for her to stay at Collinwood, as Elizabeth and Jeb are onto her. Suddenly, Maggie and Willie show up in the drawing room. Maggie is visibly shaken and Julia takes her upstairs. Willie asks Barnabas what the breathing sounds were and tells him he isn't sure how they were able to escape. Barnabas tells him it's a man named Jeb and he wonders who could have helped them escape. He goes onto mention he is once again a vampire and tells him why Willie needed to come back to Collinwood.

Upstairs in Josette's room, Maggie tells Julia she worries that Elizabeth and Amy know she isn't a Leviathan. She asks Julia who could have turned the key to allow her and Willie to escape.

Maggie is still agonizing over what transpired in the tower room. Barnabas soon walks in, and Julia leaves them alone. Maggie asks him if he knows anything, and Barnabas concludes that another Chosen Room must have been made for Jeb to change into his true form. He declares that he must defeat the Leviathans soon to keep Maggie out of harm's way.

Downstairs, Julia finishes explaining to Willie why she and Barnabas need him. Willie wants to help Barnabas, but is hesitant because he is engaged to a woman named Roxanne. Julia is very happy for him, but insists he must stay to help them fight the Leviathans. Unknown to Willie, Barnabas is standing at the top of the stairs and overhears everything. Barnabas, feeling sympathetic, agrees to let Willie leave Collinsport forever and start his own life. Julia is upset with Barnabas's decision, but he says he will have to find help from someone else.

Willie goes upstairs to say goodbye to Maggie. He gives her his blessing and tells her to take care of Barnabas and Julia in their battle against the Leviathans.

As Julia and Barnabas decide what to do next, Jeb shows up at the Old House.

Jeb requests to speak to Barnabas alone. He mocks Julia as she leaves, telling her to go take care of Maggie. Jeb admits he made a mistake turning him into a vampire because of his new powers, and reveals he caused what happened in the hallway near the tower room to make him run off. He promises Barnabas he will destroy him soon, but not before he marries Carolyn; Jeb hastily leaves. Willie returns, and apologizes to Barnabas for leaving him. He leaves the Old House, and Julia comes downstairs. Barnabas tells her that something supernatural scared Jeb away from the tower room. The door bursts open, and Willie returns, saying he will stay to help Barnabas and Julia defeat the Leviathans.

Julia returns to Collinwood and decides to go to the tower room to see if she can find any evidence of what may have scared Jeb. She arrives at the tower room and begins to look around. However, Jeb has secretly followed her and demands to know where Barnabas' coffin is hidden, or else he will kill her. The unknown spirit appears once again, and Jeb runs off.

Willie: Maggie, you've got a lot of explaining to do.

Willie: I was real nervous about seeing you again.... I kept thinking all I had to do was just look at Maggie, and I'm gonna forget all about Roxanne. But I didn't.

Jeb: I didn't bring any silver bullets. He'll be safe, for the moment.

Willie: I never knew how awful it was to be alone, until I wasn't.

Willie: You're talking to yourself, Barnabas. That's a bad sign.

Dark Shadows - Episode 957 on the IMDb 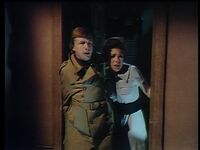 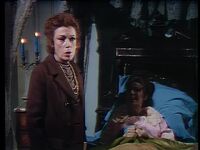 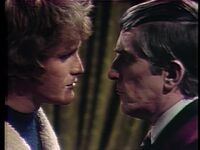 Face Off
Add a photo to this gallery
Retrieved from "https://darkshadows.fandom.com/wiki/957?oldid=141222"
Community content is available under CC-BY-SA unless otherwise noted.