Elizabeth traps Maggie in the tower room, and Willie attempts to release her.

This night has brought revenge to the great house of Collinwood. The revenge of an angry Angelique Collins, for she not only has discovered that her husband is part of Jeb Hawkes' plot, but she has been rejected again by her life-long love, Barnabas Collins, because he loves another. And so like the servant girl she was in 1797, she plots her moves carefully. Maggie Evans must fall in love with another. Barnabas must find himself as unloved as she feels. And so she works her magic.

Maggie and Quentin discover the marks on their hand, but Quentin dismisses it and embraces Maggie again, telling her how much he cares for her. Unbeknownst to both of them, Amy is standing in the doorway, seeing everything that is transpiring.

Maggie attempts to resist Quentin, fearing she will upset Barnabas, but Quentin convinces her otherwise and tells her they will still fight alongside Barnabas against the Leviathans, and they must be careful no one finds out she isn't a Leviathan. Quentin asks Maggie if they should tell Barnabas about their new-found love, but Maggie isn't sure.

Meanwhile, Amy rushes out of the drawing room and upstairs to Elizabeth's room. Amy informs Elizabeth that Barnabas, Maggie, and Quentin are all fighting against the Leviathans. Elizabeth orders Amy to tell her everything she knows.

Soon afterwards, the pitchfork symbols on Quentin and Maggie disappear, and the sudden attraction between the two goes with it. They puzzle over their recent actions. Quentin observes that it was just a moment where they looked at each other and that it won't happen again. He does still caution her about the Leviathans and then leaves. Maggie watches him go, and then runs to the fireplace to retrieve Barnabas's ring. Elizabeth walks in and asks for Maggie's help upstairs. Shortly after they leave, Amy is about to sneak out of the house, but opens the door and finds that Willie Loomis has returned. He asks for Julia or Barnabas, but neither of them are in, as well as Maggie.

Elizabeth leads Maggie up to the tower room and locks her in.

Maggie deduces that Elizabeth found out that she isn't a member of the Leviathans, and wonders what she is going to do.

Elizabeth returns downstairs and sees Willie, but she doesn't seem overly excited to see him. Willie excitedly tells her that he is engaged, but Liz is very hostile. He asks her where Maggie is, but Elizabeth tells him she doesn't know. She requests that he leave her alone and go to the Old House, since he is looking for Barnabas.

As he walks through the woods, Willie ponders why Elizabeth was acting so strangely. Moments later, he sees Amy and decides to follow her. He follows her back to Collinwood and overhears Elizabeth confirming to Amy that Maggie has been locked in the tower room. Amy tells Elizabeth that Jeb knows Maggie isn't a true Leviathan, and Jeb has said he will "deal with it soon."

Willie sneaks back into Collinwood and searches for Maggie.

Elizabeth instructs Amy to go to the tower room and tell Maggie that Jeb is coming. She arrives at the tower room and Maggie pleads with her to let her out. Amy says she can't, and only Jeb can. She leaves, and Willie sneaks in to save Maggie. Before they can escape, Amy returns and locks them both in. She returns to the foyer to meet with Elizabeth. Elizabeth intentionally leaves the door open, and leaves. Moments later, the door slams, and the trail of Jeb in his true form is seen going up the stairs.

Willie and Maggie try in vain to break out of the tower room, but are unsuccessful. They both hear the sound of breathing approaching the door.

Maggie: It's over, isn't it? So quickly. You don't feel the way you did a few minutes ago.

Maggie: The mark! The mark has something to do with the way we feel!

Quentin: Oh, Maggie, you really shouldn't be so much of a romantic. You and I merely looked at each other for a few moments.

Willie: Can you imagine that? Old Willie Loomis getting married! I betcha that's gonna shock a lot of people.

Dark Shadows - Episode 956 on the IMDb 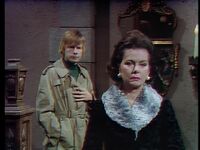 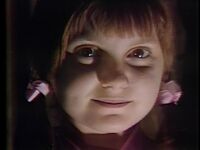 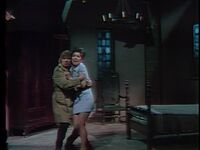 Trapped
Add a photo to this gallery
Retrieved from "https://darkshadows.fandom.com/wiki/956?oldid=141014"
Community content is available under CC-BY-SA unless otherwise noted.