A jealous Angelique casts a spell to make Quentin and Maggie fall in love.

It is night at Collinwood, and once again night is the only time that Barnabas Collins can know. Through the betrayal of another, the curse of the living dead has been reinflicted upon him. Earlier this night, he learned the name of the man who betrayed him. He then went to a house on an island off the coast to warn Angelique that her husband was the man. She refused to believe him, but later when she saw her husband with the nefarious Nicholas Blair, she realized Barnabas had been telling the truth.

Angelique rushes upstairs to her room and begins to frantically pack her belongings. Sky rushes in with a torch, claiming she must be destroyed.

Angelique attempts to reason with Sky to let her go, but he refuses. Right as he is about to burn her, she grabs the present he gave her and uses witchcraft on it to choke him. Sky surrenders and puts the torch into the fireplace, but Angelique is relentless, and Sky collapses to the floor.

Barnabas is at the terrace of Collinwood and summons Maggie. Maggie soon shows up and Barnabas tells her he has missed her. The two embrace, but Barnabas is able to resist biting her. He gives her Josette's wedding ring as a token of their friendship. They embrace again, but Quentin shows up before he can bite her. Quentin tells Barnabas he must stay away from Maggie for everyone's safety. The two depart to the Old House, as it is almost dawn.

That afternoon, Angelique shows up at the Old House while Quentin is guarding Barnabas, surprising him.

Quentin and Angelique exchange pleasantries and memories from the past, although Quentin is initially upset to see her. Angelique informs Quentin that Barnabas was betrayed by her husband, Sky, and she has just left him. Although she is upset about losing her life with Sky, she confesses that Barnabas was always her "one true love." She asks Quentin if she can stay at the Old House and meet with Barnabas at night, which he allows. Angelique momentarily recalls her time in the Old House, and seems very happy to be back. She tells Quentin she will be sleeping in Josette's room.

Later that day, Sky shows up at the Old House, asking to see Angelique. Quentin tells him she isn't there, but both men then notice her coming down the stairs. Quentin leaves the two to talk in the drawing room. Sky tells Angelique that he has been with Nicholas all day, and admits he is still in love with her. He asks her to join the Leviathans, but she adamantly refuses. She kicks Sky out of the house, but not before he tells her that he will be waiting for her if she ever changes her mind.

Angelique repeats the story she told Quentin to Barnabas, and then informs him that Nicholas has returned to aid the Leviathans. Shocked, Barnabas tells her he must go and warn Maggie, as Nicholas had nearly killed her once before. Angelique is clearly jealous of his concern for Maggie as she watches him quickly leave the house.

Barnabas meets with Maggie at the terrace and tells her that Nicholas is back and she must be alert at all times. The two embrace as Angelique watches from a distance.

Later, inside the drawing room at Collinwood, Quentin is telling Maggie she must stay away from Barnabas out of fear that the Leviathans will use her to get to him. She thanks Quentin for her concern, but tells him she still plans on seeing Barnabas anyways. Outside the window, Angelique casts a spell over Quentin and Maggie, making them fall in love. Maggie takes off Josette's ring that Barnabas gave to her and throws it into the fireplace. The two kiss passionately, before noticing they both have pitchfork marks on their hands.

Sky: I wanted it to work out. I really wanted you to be with me, and I'm sorry you can't. Goodbye, Angelique.

Angelique: Maybe it was all wrong from the beginning. We both kept from each other our darkest secret.

Angelique: The truth is my interest in you in the past was never more than a device intended to upset Barnabas. I was very good at devices. Always have been. Perhaps, in spite of my feelings for Sky, Barnabas has always been my one true love.

Maggie: Barnabas, it's so difficult to understand you. Sometimes you seem so warm, and other times I feel I don't even know you.

Angelique: I am what I was, what I shall always be.

Dark Shadows - Episode 955 on the IMDb 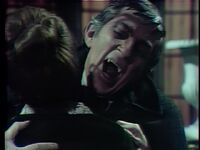 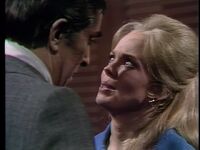 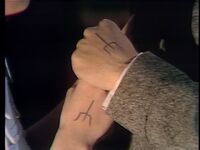