Nicholas forces Sky to choose between Angelique and the Leviathans.

Earlier this night, Carolyn Stoddard woke from a strange and disturbing dream, in which she saw an empty coffin in her father's grave. She related this dream to a young man named Jeb Hawkes, and he became even more disturbed by it than she. He went to the grave with a companion, and discovered the coffin was not empty, instead, to his horror, he saw the corpse of Paul Stoddard staring up at him with a vengeful smile.

Megan tells Nicholas of Paul's strange expression, and reveals that Jeb burned the body. Nicholas is not pleased by this, and fears that the spirit of Paul may haunt Jeb to his own grave. Megan threatens to kill Nicholas if he lets anything happen to Jeb.

Nicholas is unintimidated by Megan and tells her not to threaten him again. He realizes she is in love with Jeb, but she denies it. Nicholas tells Megan he has been given a second change from a "higher power" and his plans for the Leviathans will not fail. He tells Megan he will do what he can to protect Jeb.

At the Rumson Mansion, Sky tells Angelique that someone is coming to meet them in two hours, and wants her to look her best.

Megan is still sitting on the terrace at Collinwood. She hears the sound of a bat and Barnabas has appeared. Megan is upset to see Barnabas, calling him a traitor. She attempts to leave, but Barnabas puts her into a trance and bites her.

Now under Barnabas's power, Megan tells him she has no more use for Jeb, and only David knows how to destroy Jeb, since he can read the Leviathan Book. She also tells Barnabas that Sky is a Leviathan and told Jeb about his past as a vampire.

Barnabas appears at the Rumson Mansion, startling Angelique. He tells her he has been turned back into a vampire because Sky is a Leviathan and told Jeb about him. Before they can continue talking, Sky walks in to give her a present, and the doorbell rings. Sky quickly leaves and Angelique asks Barnabas to leave as well.

Downstairs, Sky is meeting with Nicholas, discussing plans for the Leviathans. Sky tells him that being a Leviathan is one aspect of his life he has never shared with his wife, and wants to turn her into a Leviathan immediately. Angelique enters the room and sees Nicholas.

Angelique is visibly shocked, but tries to play things off so Sky doesn't get suspicious. Angelique confronts Sky about being a Leviathan, which he admits is true. She runs out of the room and begins to pack her things. Nicholas tells Sky that Angelique must be destroyed, and he must be the one to do it.

Sky enters Angelique's room with a torch and prepares to set Angelique on fire.

Nicholas: At the risk of sounding banal, it's a small world, isn't it?
Angelique: It's too small for both of us, Nicholas.

Nicholas (to Angelique): You seem to be at a loss for words. How uncharacteristic.

Nicholas: How typically female. You overlook your own deception, but you're furious about his.

Dark Shadows - Episode 954 on the IMDb 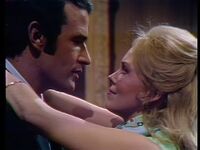 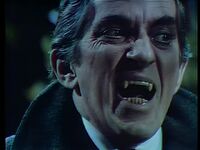 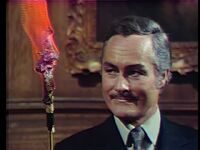 Flames of Passion
Community content is available under CC-BY-SA unless otherwise noted.
Advertisement