Nicholas returns and orders Jeb to change into his Leviathan form.

Danger looms on the great estate of Collinwood. For Barnabas has destroyed the antique shop, and with it, the room where Jeb must go to assume his other evil form. But Elizabeth has taken Megan into the house, and given Jeb the deserted coach house on the estate. Megan is determined to consecrate a room there. A room where Jeb can become the true Leviathan.

Jeb tells Megan that he doesn't want to change back to his "true" form, and Megan realizes it's because of Carolyn. He accuses her of being jealous, but tells her that everything is different now, and kisses her. Just then the lights go out, thunder roars, and the door bursts open. Someone approaches the cottage.

Nicholas Blair returns and assumes leadership among the Leviathans. He orders Megan to leave and scolds Jeb for all of the mistakes he has made. Jeb refuses to acknowledge him at first, but Nicholas tells him he can change Carolyn's feelings about him.

Meanwhile, Nicholas is still berating Jeb for sacrificing Philip and Barnabas as Leviathan members for his own personal gain. He orders Jeb to give him the Leviathan Box and he consecrates a room where Jeb can change into his true form. Jeb tries to escape, but Nicholas stops him.

Nicholas forces Jeb into the Chosen Room to change into his true form.

That night, Carolyn has another dream about Jeb, similar to the previous two dreams. She ends up in a cemetery and sees an empty coffin, located next to the grave of Paul Stoddard.

At Jeb's cottage, Nicholas assigns Bruno to look after Jeb while he is in the Chosen Room. Nicholas tells him there must be no more murders while Philip is in jail, and leaves to go to Collinwood. The sound of breathing stops, and Bruno enters the Chosen Room to investigate. The creature comes after him.

Bruno manages to escape and the creature turns back into Jeb. Jeb leaves the cottage and goes to Collinwood.

At Collinwood, Carolyn tells Jeb she had the dream again and tells him she saw her father's coffin empty. Megan arrives and gives Carolyn a sleeping pill. Jeb kisses her in front of Megan. Jeb then requests Megan to meet him at Paul's grave once she is asleep.

Jeb digs up Paul's grave with Megan and opens the coffin. He sees Paul with his eyes open and smiling at him. Feeling as if he is being mocked, Jeb decides they must burn the body.

Nicholas: Am I going to have to constantly prove what powers I have to you, Jeb? I do hope not. That would be unbelievably boring for both of us.

Dark Shadows - Episode 953 on the IMDb 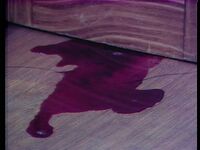 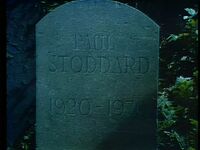 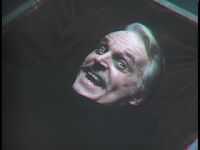 Rest in Peace
Community content is available under CC-BY-SA unless otherwise noted.
Advertisement