Julia begins injections in hope of curing Barnabas of his vampirism.

The shadow of the bat summoned from Hell by Jeb Hawkes has fallen across Barnabas Collins, and once more he is a vampire. Already the blood lust has made him kill tonight, but before the dawn comes, he knows there is something else he must do. He must try to destroy the antique shop, and with it the upstairs room. The only place he knows where Jeb can transform himself into a powerful, inhuman killer.

Megan enters the antique shop and begs Jeb to wake up. She calls Elizabeth at Collinwood and tells her the shop has been destroyed and Jeb is nowhere to be found. Elizabeth tells her she is on her way.

Barnabas returns to the Old House and tells Julia what he did, but he feels it will take much more than that to destroy Jeb once and for all. Julia apologizes for what has happened to him and tells him she will resume the injections immediately.

Elizabeth brings Megan back to Collinwood. Megan tells her she doesn't care about the antique shop being gone, she just wants to know where Jeb is. She looks into the drawing room and sees Jeb.

Jeb tells Megan and Elizabeth he managed to escape the fire and into the woods. Megan informs Jeb she saw Barnabas in the crowd of people who were watching the fire, but he disappared.

At the Old House, Julia gives Barnabas the first injection. She leaves, and Jeb appears, surprising Barnabas. The two exchange verbal threats before Barnabas admits he destroyed the antique shop. Julia returns and Jeb angrily leaves. The two decide to bring back Willie Loomis to help guard Barnabas during the day.

The next day, Megan goes to visit Philip at the Collinsport Jail. Philip is disgusted at being in jail for three murders he didn't commit. Megan tries to convince Philip that Jeb will find someone to take his place. Philip admits he is glad the shop burned down, and when he is free, they will leave Collinsport forever.

Meanwhile, Elizabeth gives Jeb a cottage on the Collins estate, including a "new" Chosen Room. He is thankful, and tells her to no longer consult Barnabas on anything regarding the Leviathans.

That night at the Old House, Barnabas awakens from his slumber. He tells Julia he is leaving for the night, as there is one more thing he must do.

Megan and Elizabeth are talking at Collinwood. Megan tells her she has never been happier in her life.

Barnabas appears to Philip in his jail cell. He admits to Philip that Jeb turned him into a vampire, but he only wants to help him. Philip is furious about what Jeb and the Leviathans have done to Megan.

Meanwhile at Jeb's cottage, Megan is mocking Philip and wonders what she ever saw in him in the first place. She is glad the antique shop is gone because it reminds her of Philip. Megan requests that Jeb go into the Chosen Room, but he refuses. She becomes upset and jealous of his affections for Carolyn, but they end up sharing a kiss. Suddenly, a crash of lightning sounds and the lights go out. Someone approaches the cottage.

Jeb: Gone? Who said I was gone? No one can get rid of me that easily.

Barnabas (to Jeb): Your anger has a way of getting the better of your good sense...just like when you were a child.

Dark Shadows - Episode 952 on the IMDb

Dark Shadows Everyday - Episode 952 - Something Evil People Are Afraid Of 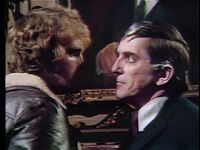 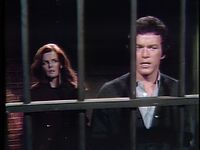 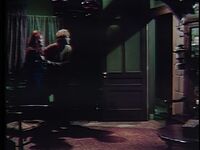