Barnabas is dismayed to discover he is once again under the vampire curse.

The great estate of Collinwood has never known a more explosive night than this. Jeb has definite proof that Barnabas is a traitor to the Leviathans. And before his punishment comes, Barnabas is determined to steal the sacred Naga box, so that no other innocent human can be made a member of the vicious cult. He goes to the antique shop, leaving Quentin outside as his guard, succeeds in taking the box from Jeb's room. Then Barnabas, alone, takes the box to the one place he knows it can be destroyed.

Just as Barnabas is about to destroy the Leviathan Box, it opens and the vampire bat bites him.

Jeb stands triumphant over Barnabas's unconscious body and declares it a fit punishment for a traitor. He apologizes to Haza and Oberon, but insists it was necessary to ensure the longevity of the Leviathans. Shortly thereafter, Barnabas regains consciousness and realizes he is once again a vampire.

Meanwhile, Quentin is still outside the antique shop. He sees Jeb with the Leviathan Box and he confronts him. The two begin to fight, but Jeb pulls a knife on him, and Quentin surrenders and leaves.

Quentin returns to Collinwood and talks to Julia about where Barnabas might be. Julia fears Jeb may have turned him back into a vampire. They decide to go into the woods to search for him.

Barnabas arrives at Collinwood, eager for blood. He decides he must bite Maggie and make her his, at long last.

Barnabas manages to resist biting Maggie and instead goes to the Blue Whale. A woman walks in and asks where she can find the antique shop. Barnabas notices she is wearing a Naga necklace. She reveals herself to be Nelle Gunston, a devoted Leviathan who traveled from Virginia to meet Jeb. Nelle became a Leviathan through Bruno, and declares that she would do anything to serve their cause. Julia and Quentin arrive, and are greatly disturbed to find Barnabas talking to a Leviathan. They worry that he has switched sides again.

Barnabas takes Nelle to the Old House, where he asks her how she and Bruno became Leviathans. Nelle becomes suspicious of his questions and pulls a knife from her purse.

Nelle accuses Barnabas of not being a true Leviathan. He finally admits she is right, and she puts down her knife. Barnabas shows her what he really is, and promptly bites and kills her. Julia and Quentin walk in to discover him standing over the body and he confirms that he is again a vampire. Julia offers to start her treatments immediately, but Barnabas says there is one thing he needs to do first.

Barnabas enters the antique shop shortly after Jeb turns the lights off. He goes upstairs to make sure that Jeb is in the Chosen Room. Barnabas pours gasoline all over the shop and sets it on fire.

Barnabas: May that breathing never come from any room again!

Dark Shadows - Episode 951 on the IMDb 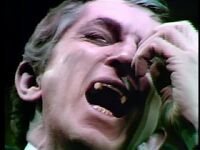 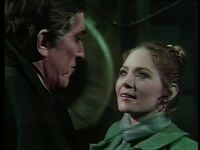 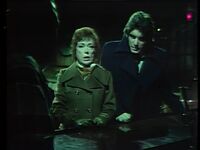